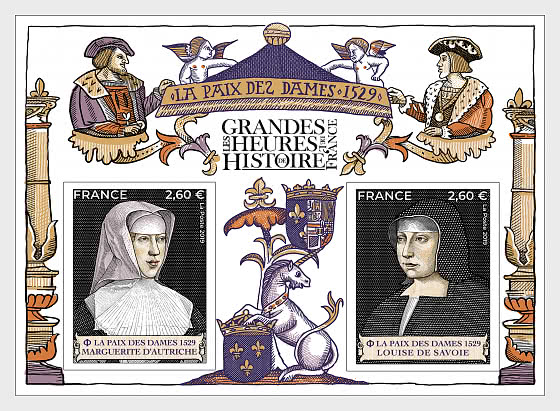 About Great Moments in French History 2019

On March 17, 1526, Francis I canceled the Treaty of Madrid and launched the 7th Italian War between him, King of France, and Charles V, Emperor of Austria.

On August 3, 1529, the Peace of the Ladies, also called Peace of Cambrai, put an end to this war. The treaty was signed at Cambrai, in the hotel Saint-Pol, by Louise of Savoy, mother of François 1st, and Marguerite of Austria, aunt of Charles Quint.

Francis I renounced his pretensions in Italy, ceded Artois and Flanders, and recovered Burgundy.

To seal this agreement, he agrees to marry Eleanor of Habsburg, sister of the emperor. Finally the treaty allows, in exchange for a huge ransom, the release of the royal children held hostage in Madrid.

Peace was short-lived, the resentment of Francis I led to the 8th war of Italy in 1536.