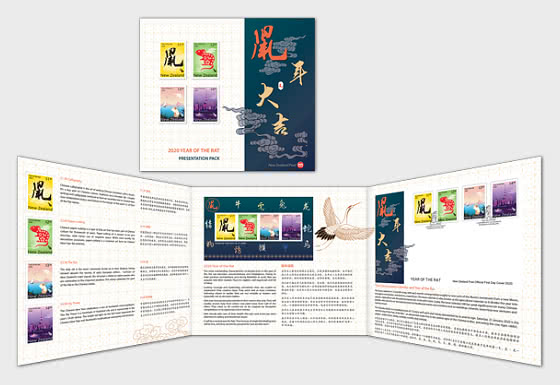 About 2020 Year of the Rat Presentation Pack

In 2020, Chinese New Year will be celebrated on 25 January, bringing in the Year of the Rat. The Chinese zodiac is a repeating cycle of 12 years, with each year being represented by an animal sign. The rat ranks first in the animal signs of the Chinese zodiac, preceding the cow, tiger, rabbit, dragon, snake, horse, sheep, monkey, rooster, dog and pig.

Issue Information
The lunar calendar is 12 months long, with each month corresponding roughly to one cycle of the Moon’s movement from a new Moon, through to a full Moon, and back to a new Moon. The lunar calendar is also known as the agricultural calendar as it divides the year into seasons. Agriculture was the principal economy of ancient China. Today, the lunar calendar still has great significance for many Chinese people, who use it to set the luckiest dates for traditional events and activities such as weddings, funerals, launching new ventures and moving to a new house.

People born in the Year of the Rat are clever and adapt quickly to new environments. They prefer to live quiet and peaceful lives.

Optimism and energy are key traits for those born in the Year of the Rat. They tend to be sensitive to others’ emotions and comments but are known to be stubborn with their own opinions. While the Rat personality is kind, their words may seem impolite or rude due to a lack of communication skills.

Rats are great at seizing opportunities that present themselves but can sometimes lack courage. They love to be organised and place great value on family. They like saving money and can be known to be a bit ungenerous. Their love of hoarding will sometimes cause them to waste money on unnecessary things.

The most outstanding characteristics of people born in the Year of the Rat are alertness, resourcefulness and intelligence. Owing to their positive contributions and strong flexibility at work, Rats are popular with their leaders. They are vigilant, well organised and full of ideas.

$1.30 Calligraphy
Chinese calligraphy is the art of writing Chinese characters with a brush. It’s a key part of Chinese culture, traditions and everyday life. Couplet writing and calligraphy continue to have an essential role in Chinese New Year celebrations today, and feature in the design of this year’s $1.30 Year of the Rat stamp.

$3.30 The Rat
The ship rat is the most commonly found rat in New Zealand, having stowed aboard the vessels of early European settlers. Common on New Zealand’s main islands, the rat poses a threat to native species who are vulnerable to this imported predator. This stamp celebrates the spirit of the Rat in the Chinese zodiac.

Miniature Sheet
The miniature sheet features Chinese symbols for each of the animals in the lunar calendar - the rat, ox, tiger, rabbit, dragon, snake, horse, sheep, monkey, rooster, dog, and pig in blue and gold, the colours of the rat.

Presentation Pack
The presentation pack provides further detail about the characteristics of people born in the Year of the Rat. Extra information regarding the Chinese lunar calendar is also provided for a bit more understanding. This is accompanied by a key showing the 12 animals of the Chinese New Year and the years they will fall in for the coming future. The presentation pack contains a complete set of stamps, a miniature sheet, first day cover and an intricate paper cut-out of a rat.