100 Years of the Salzburg Festival - Set 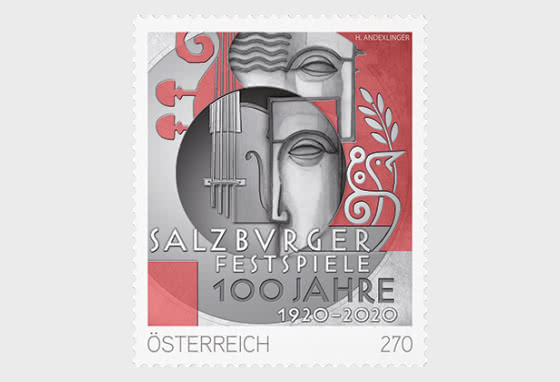 About 100 Years of the Salzburg Festival

A festival of high culture

Every year it is the cultural highlight of the summer in Austria and, in terms of international resonance, also throughout Europe: the Salzburg Festival. Austrian Post is celebrating the 100th anniversary with a commemorative stamp.

Using a design adapted from a coin issued by the Austrian mint, the commemorative stamp shows stylised masks and a reduced violin, representing music and the performing arts. A dove of peace in a reduced linear form symbolises the festival’s character as a peace project after the end of the First World War.

In 2019 more than 270,000 visitors from around the world attended a total of 199 performances. Every year the best-known artists and orchestras from around the world put on a diverse artistic programme with theatre, opera and concert performances spanning the entire range from classical to modern. The central focus is on the works of Wolfgang Amadeus Mozart, probably the best known citizen of Salzburg of all time, as well as those of Richard Strauss, who was one of the co-founders of the festival.

The performances of Jedermann (Everyman) in the Cathedral Square always attract a lot ofinterest. Hugo von Hofmannsthal’s famous Spiel vom Sterben des reichen Mannes (Play of the Rich Man's Death) has been performed there almost every single year since the production by Max Reinhardt on 22nd August 1920, which is considered the birth of the festival.

The founding of the Salzburg Festival

Thoughts of organising a regular Mozart festival in the city had already been mooted back in the 19th century. Eventually, however, a circle of people around Max Reinhardt, Hugo von Hofmannsthal and Richard Strauss succeeded in getting the festival established with the performance of Jedermann in 1920. The first concerts followed in the next year, and in 1922 Richard Strauss himself conducted the first opera performance, Don Giovanni. In contrast to the Bayreuth Festival, the Salzburg Festival is not confined to a single venue, with the venues instead comprising the Large Festival Hall, the House for Mozart, the Felsenreitschule, the Cathedral Square and the Collegiate Church. During the festivalseason Salzburg truly becomes “the heart of the heart of Europe”, as Hugo vonHofmannsthal once said.