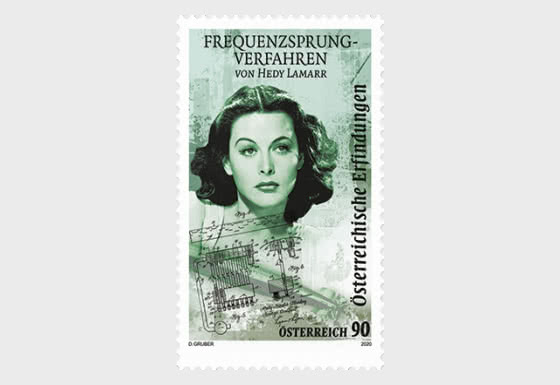 From Vienna to Hollywood

This year's stamp in the “Austrian inventions” series is dedicated to an exceptional lady:Hedy Lamarr was not just a world-class film star but also a highly gifted inventor, whose pioneering inventions are still being used to this day.

Most people know Hedy Lamarr as a “screen goddess” who was once considered the most beautiful woman in the world, but she was also an incredibly multifaceted woman, who led an adventurous life.

Born in 1914 as the daughter of a banker and a pianist into a Viennese Jewish family, Hedwig Eva Maria Kiesler, as she was named at birth, played her first leading role in a film alongside Heinz Rühmann at the tender age of 17. Her next film, “Ektase” (Ecstasy), from 1933 provoked scandal due to its nude scenes and her husband – the first of six – forbade her to take part in any more films. The marriage ended in 1937, and Hedwig travelled alone via Paris and London to the USA, where, as Hedy Lamarr, she enjoyed a successful career in films and became a style icon. She made countless films with the biggest stars of the day up until 1958, thereafter living an extremely reclusive life. She died alone on 19th January 2000 in Florida, and was ultimately laid to rest in a grave of honour in Vienna.

But Hedy Lamarr was not just an exceptionally beautiful film star; she was also a gifted engineer. Together with the American composer George Antheil, in 1942 she devised the frequency hopping technique for the Allies that could be used to steer torpedoes. Switching between frequencies made the radio signals difficult to locate and secure against interference. Whilst the complex process was admittedly not used by the USA in the war, it became the basis for modern communications technologies such as Bluetooth, WLAN and GSM.

In 1997 Lamarr and Antheil were awarded an Electronic Frontier Pioneer Award for their invention. In 2014 Hedy Lamarr was posthumously given a place in the National Inventors Hall of Fame in the USA. To honour her, Inventors’ Day is celebrated on her birthday on 9thNovember in Austria, Germany and Switzerland. The Hedy Lamarr Prize, honouring female Austrian scientists for innovative services to IT, was awarded for the first time in 2018.