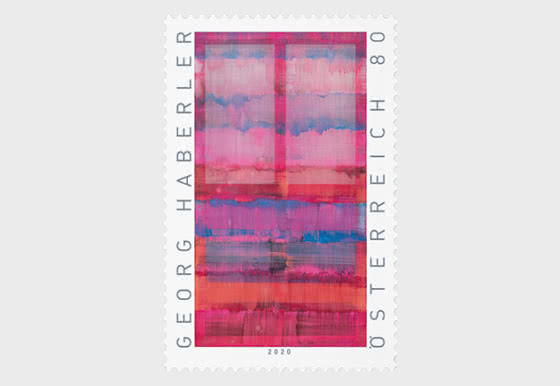 This year’s special stamp from the “Young art in Austria” series shows an untitled, richlycoloured, large-format work by Georg Haberler dating from 2019.

It is somewhat reminiscent of looking through a curtain across a window: the background shimmers through the fine screen printing fabric and alters our perception of the paintingin front of it, thus sending it further “into the foreground”. At the same time, however, thelight falling through the thin material casts colours onto the wall behind it, thereby making this also a part of the work of art. The frame likewise becomes a design element as a result of its being discernible through the transparent material. The painting is executed in highly pigmented acrylic colours, especially shades of pink and blue.

Born in Graz in 1985, after training as a computer scientist, Georg Haberler studied architecture in Graz. Starting in 2010 he studied under Erwin Bohatsch at the Academy of Fine Arts in his chosen home of Vienna. Studies in Porto and Hamburg with Anselm Reyle and Gregor Hildebrandt followed. What is particularly important to the artist is the fact that in painting, unlike in architecture, he can control and handle the entire creation process himself. In his work he places considerable emphasis on manual processes and skills which combine art and crafts.

Typography and playing with words are another important aspect of Georg Haberler's art: in a series of works which draw on a particular Viennese connection, the titles of songs by Georg Kreisler are turned into anagrams, so that “Die Wanderniere” (The Floating Kidneys) becomes “Die Einwanderer” (The Immigrants), for example. Words become tangible, butthey are enigmatic. They do not give any answers but become questions. Works of art usingreflections on lacquered metal or an engraved “mobile phone” that not only reflects theuser but also functions as a printing plate also reflect Haberler's technical training.

The 1.8 by 1 metre-large work on which the stamp is based is part of a series that was exhibited in Berlin in 2019.