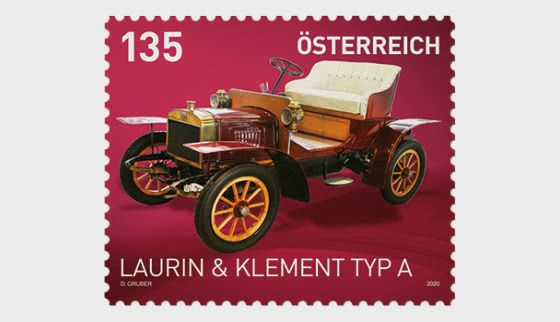 About Laurin & Klement Type A

The design for this year's special stamp from the “Cars” series is delightful: the two-seater Laurin & Klement Voiturette A with elegant dark red paint and wooden spoked wheels.

Book dealer Václav Klement and locksmith Václav Laurin founded the company Laurin & Klement in the Bohemian city of Mladá Boleslav in 1895, initially making and repairing bicycles. They soon began to make motorbikes, even winning races with some of them. From 1901 on, L & K, the initials by which the company was known, began to develop cars.

The first model was introduced in 1905: the Laurin & Klement Type A with a water-cooled, 1-litre, four-stroke, two-cylinder engine and an output of 7 HP depicted on the special stamp. The little two-seater voiturette, as such light small vehicles were called, could achieve speeds of up to 40 km/h. The car was the star of the Prague Car Festival in 1906 and was extremely successful. It could be bought for just 3,600 Kronen, making it significantly cheaper than other cars on the market. Particularly noteworthy features are the modern rear-wheel drive via a drive shaft and the three-speed gearbox with the gearlever on the outside of the driver’s seat, which was positioned on the right-hand side of the vehicle.

The L & K Type B, with a bigger engine capacity and already available as a four-seater, followed in 1906, as well as models C, D and E, with more powerful engines or four cylinders. This meant the company issued an impressive five models in its first production year, and the factory had to be expanded. In subsequent years they designed not just cars and motorbikes but also racing cars, vans and omnibuses. Laurin & Klement converted to become a public limited company, and went on to be the biggest car maker in the monarchy, exporting its vehicles around the globe.

After the First World War, the company not only made 4-, 6- and 8-cylinder cars, buses and lorries, but also added agricultural vehicles and aircraft engines. In 1925 Laurin & Klementmerged with the Škoda works in Pilsen, and since then their cars have been made under thebrand name Škoda. Bicycle and motorbike production was halted.