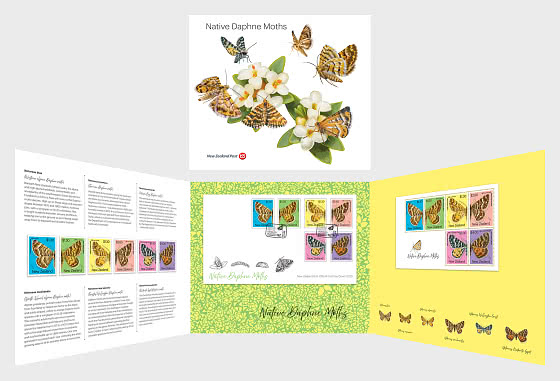 From the coast to the highest mountains, and from Stewart Island in the south to the Far North, Aotearoa New Zealand is home to 35 recognised species of Daphne moth in the genus Notoreas, all with discrete distributions within New Zealand.

Daphne moths are colourful, day-flying species with wingspans between 18 and 26 millimetres, characterised by constantly vibrating their neatly patterned wings when they are active on sunny days. They are often seen sunbathing on bare surfaces, feeding on nectar or carefully laying their eggs on the right plant during periods of bright sunshine.

Their caterpillars feed on the foliage of just one family of plant, which includes the two New Zealand genera of daphne – Pimelea and Kelleria – while the adults take nectar from the sweet-smelling flowers of their hostplants. Together with their daphne hostplants, they are often numerous in naturally open habitats from the coastline – sand dunes, gravel beaches and rocky headlands – through inland short-tussock grasslands, to a range of open habitats above the treeline such as alpine grassland, herbfields, cushionfields and snowbanks.

With a few species found as high as 2,000 metres above sea-level, Daphne moths really do define New Zealand’s dynamic topography, coastline and geological features and epitomise our picturesque and varied landscapes.

$1.30 Notoreas blax
The Western alpine Daphne moth flies in bright sunshine between January and March, keeping low to the ground to avoid being swept away from its exposed and dynamic habitat beneath New Zealand’s loftiest peaks.

$1.30 Notoreas casanova
The Foveaux Daphne moth was discovered in 1982 and formally named in 2010. It is only known to inhabit Tiwai Peninsula, Fortrose Spit and Three Sisters Sand Dune.

$1.30 Notoreas edwardsi
With a wingspan of about 20 millimetres, the recently discovered and described Mason Bay Daphne moth is named for Eric Edwards from the Department of Conservation, who was the first to find the caterpillars of this colourful species.

$2.60 Notoreas mechanitis
Alpine grasslands on both sides of the Main Divide from Fiordland to Nelson are home to the black-and-white-striped, yellow-to-orange South Island alpine Daphne moth.

$3.30 Notoreas new species
The Wellington coastline’s sand dunes, gravel beaches and rocky headlands are all inhabited by an undescribed but distinctive species of Daphne moth whose plump, greenish-pink caterpillars feed on several different sprawling daphne species in the genus Pimelea.

$4.00 Notoreas new species
The Canterbury coastline south of Christchurch is notable for the extensive sand dunes and gravel beach of Kaitorete Spit. Much of the 25 kilometre long spit is protected for its biodiversity of flora and fauna, including this highly distinctive Kaitorete Spit Daphne moth.

Miniature Sheet
The miniature sheet for this issue features a simple white background to highlight the pop art palate of the stamps, and includes an additional moth illustration.

Presentation Pack
Discover the fascinating daphne moths of New Zealand with this presentation pack. With these vivid stamps designed by Wellington artist Stephen Fuller and commentary by moths and butterflies expert Brian Patrick, you’ll get an insight into six of the 35 species found around New Zealand. The pack comes with a full set of six gummed stamps, a miniature sheet and a first day cover.