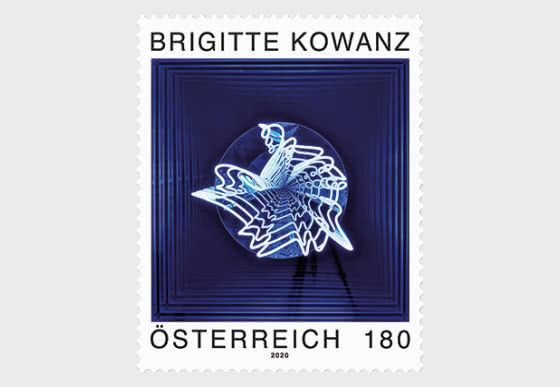 The special stamp from the “Contemporary art in Austria” series shows the work “Opportunity” by the Viennese artist Brigitte Kowanz, who deals with light as a designmedium in her work.

Brigitte Kowanz was born in Vienna and studied at the University of Applied Arts from 1975 to 1980. She has been a professor at the Institute of Transmedial Art at the very same university since 1997. In 2017 she collaborated with Erwin Wurm to design the Austrian pavilion for the Biennale in Venice.

The design on the stamp is a light installation from 2017 which was shown in an exhibition in the Galerie Häusler in Zurich. It represents the concept “Opportunity” by taking the artist’s handwriting and creating a virtualised and digitised version of it. This extremely personal piece of writing was then shaped into fluorescent tubes filled with argon and fluorescent material, thus becoming a glowing blue message.

Light, space and code have been at the centre of Brigitte Kowanz’s work since the 1980s. “Light is what you see”: light makes everything else visible, but itself mostly remainsinvisible or transparent. In her works, the artist creates situations in which light can show itself. Space is also addressed. Three-dimensional works like “Opportunity” are “infinity boxes” – using light, glass and mirrors they create what appear to be never-ending virtual spaces. When looking at the work from a real space you enter this virtual space and encounter your own reflection in it. This creates an “opportunity” for reflection and areality check – the recognition aspect being a significant element.

The digital world is, however, not only addressed by means of these virtual spaces, but also through codes in various forms. For example, as an earlier binary code for transmitting information at the speed of light, Morse code is the foundation of the digital era. In“Opportunity”, by contrast, writing and language are used as a code. Depending upon the angle from which it is viewed, the writing shifts between abstract lines and concrete terminology, between being legible and illegible.