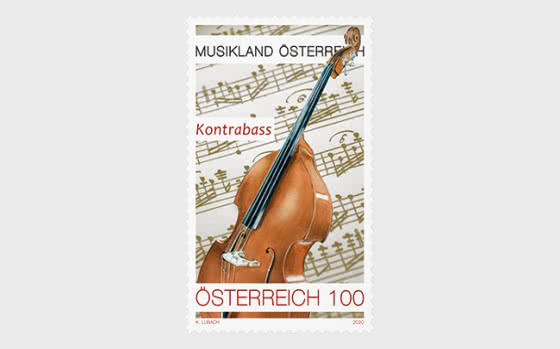 The first issue for the new special stamp series “Austria, land of music” is dedicated to thedouble bass. It plays an important role in the orchestra and is a worthy introduction for this series.

As the biggest and lowest-pitched instrument, the double bass is, to a certain extent, the musical foundation of the orchestra – it is an indispensable element, even if it usually remains in the background. From the technical point of view, it is a string instrument. Unlike the violin, the viola and the cello, however, the double bass has retained the narrow shoulders of the viol and is tuned in fourths. What is more, because of the bigger distances between semitones, the instrument is played using different fingerings from the other string instruments. As the strings are under much greater tension, the double bass has a mechanism with gears, which can be seen on the stamp.

The double bass is either played with a bow or plucked. As well as being used for orchestral and chamber music, the instrument is also frequently used in jazz, in this case generally being plucked. Depending upon what they are used for, double basses usually have four or five strings. During the Viennese classical era five-stringed instruments tuned in the Viennese style (Wiener Stimmung) were popular, and some concertos for double bass were even composed.

Whilst the previous “Musical instruments” series primarily presented instruments from the Wiener Klangstil (Viennese sound style), the new series “Austria, land of music” links each instrument with a specific piece of music for that instrument by an Austrian or German- speaking composer.

An Austrian composer from the Viennese classical era was Carl Ditters von Dittersdorf (1739–1799), whose works include two concertos for double bass. An excerpt from a manuscript of his Concerto for Contrabass No. 2 in E-flat major is shown in the background of the stamp and on the frame of the mini sheet. This handwritten music by the composer comes from the State Library in Schwerin, the capital city of the German federal state of Mecklenburg-Vorpommern, which acquired it as part of the collection of the Austrian music copyist Johann Sperger. The concerto is here shown in the original key of E-flat major, but today it is mostly played in E.