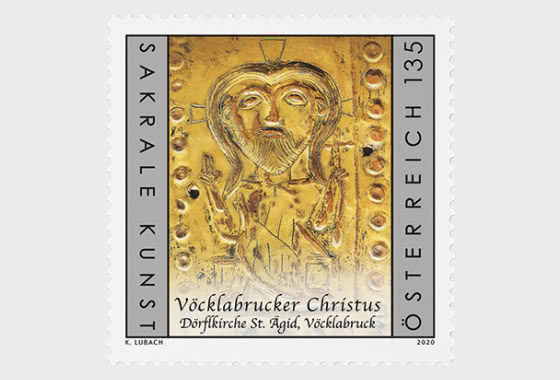 The church on the bridge over the Vöckla

This engraved stamp from the series “Religious art in Austria” shows a work of art ofparticular art-historic importance: the “Vöcklabrucker Christus” is a very old depiction ofChrist on a copper sheet which was found in the village church in Vöcklabruck.

In 1134 the nobleman Pilgrim of Weng acquired the bridge over the river Vöckla which gave the Austrian district of Vöcklabruck its name. Close to the bridge, also known as the“Dörflbrücke” (meaning little village bridge), he built a hospice, the oldest in Upper Austria, and the so-called village church, which is dedicated to St. Giles. Starting in 1688, under the direction of the architect Carlo Antonio Carlone, the church was renovated to become a baroque cross-in-square church, decorated with opulent frescoes by Carlo Antonio Bussi and altar paintings by Johann Karl von Reslfeld. The former hospice is now the baroque vicarage.

During renovation work in 1978 four gilt copper sheets measuring 23 by 7 centimetres each and showing a total of ten chased and inscribed figures, were found in an old cupboard inthe village church’s sacristy. These are works of art showing a Langobardic influence, probably book bindings or parts of a portable altar, which are thought to date from the period between the 8th and the 12th century. Scientific examinations have not been able to answer all the questions on these finds, but what is not in dispute is the extraordinary art- historical value.

The design on the stamp shows the most outstanding of the ten reliefs: a representation ofthe resurrected Christ which is known as the “Vöcklabrucker Christus”. Behind the Christfigure, a cruciform nimbus without halo can be seen. The expressive, heart-shaped face is framed by long hair and a beard, and its gaze is directed at the beholder. The right hand is raised in blessing, whilst the left hand is holding a ferula. A horizontal line represents the grave from which Christ has risen. The Vöcklabrucker Christus is the upper of two figures on a vertical copper sheet. Below him can be seen the apostle John, who was especially close to Jesus.