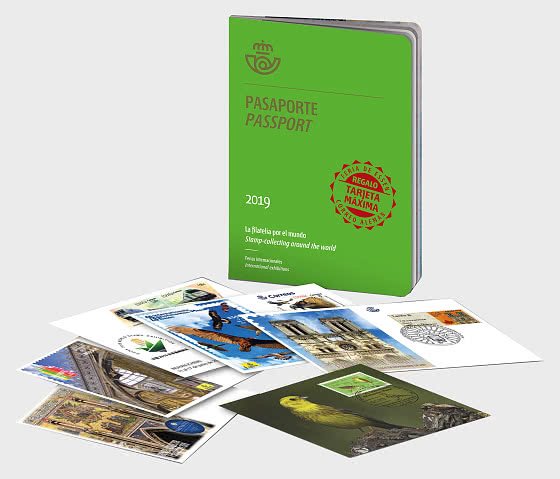 Spanish philately around the world

Correos presents a philatelic document, "passport" collectible. With information about each fair, the city in which it is celebrated, outstanding monuments,…

The 5 souvenir cards of the international fairs that have been attended throughout the year 2019. Protected in filoestuches.

Likewise, 5 special postmarks have been made for each of the fairs with which the stamps of said cards have been obliterated.

This year, as a GIFT, the postcard issued by the German mail is included, especially for the Essen stamp fair where the scribe Cerillo bird appears.

Essen International Stamp Fair, from May 9 to 11, we attended our usual appointment in Germany. The most special broadcast of this Central European fair was that of Europe that this year was dedicated to birds with a careful Premium Sheet. Stamp: Europe. Birds. Osprey. Rate B. Issue: 04/23/2019.

Sberatel International Fair 2019, Prague, the Prague fair, this year between September 6 and 7, is another of the most traditional to which Spanish philately attends. This year, sales such as trains, animals and heritage stood out. Stamp: 40th Anniversary Elections to the European Parliament. Issue date: 03/15/2019

Chinese Fair 36 World Stamp Exhibition Wuham 2019. Located in the province of Hubei, this Chinese city is emblematic for its lakes and parks. Attendance at this fair, between June 11 and 17, was very special because it was here that the seal that Spain has made jointly with China was presented. Martin Mörck was present at the Spanish stand, one of the designers of the label who also signed envelopes and cards. Emission: The new silk route. Joint issue Spain-China. Issue date: 06/11/2019.

72nd Salon Philatelique d'Automne de Paris, from November 7 to 9 we went to one of the most important Philatelic Fairs in Europe with an excellent participation and sales data, this year due to the stamps of Andorra Spain that were in great demand during every day of the fair that this year met its 73rd edition. Stamp: ATM label design Notre-Dame Cathedral. Issue: 07/11/2019.

Milanofil XXXII Edizione Fair. This March 2019 we attended for the first time the Italian philatelic fair invited by the Italian mail. As happened at the Prague fair, the most relevant stamps were those dedicated to trains and also those related to football. Stamp: Tourism. Beach. Issue: 01/02/2019.

The memory cards have only been acquired at different fairs and now so that all our subscribers and customers can enjoy them, they have all been collected together in this passport. The 5 cards include the seal cited obliterated with a special postmark designed for each of the different fairs.