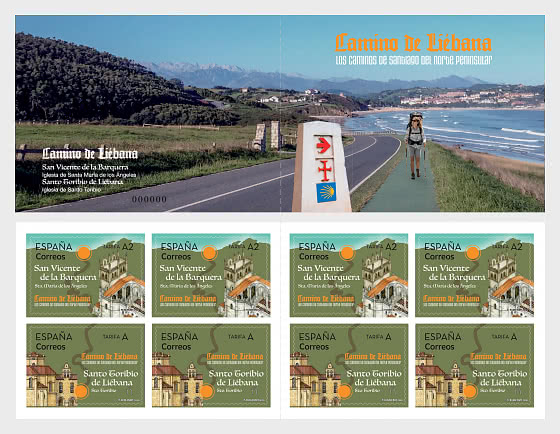 About The Routes of St. James, Way in Northern Spain

The northern route of St James’ Way in is one of the historical routes of all those that form this ancient pilgrimage. Specifically, this route is one of the most trodden paths by European pilgrims who set out to reach Compostela and visit the tomb of the apostle, St. James.

This path stretches across the whole of northern Spain, following the Cantabrian coast, from France to Galicia.

The northern route of St. James’ Way has multiple paths you can take to navigate the shores and inlets of the sea, before reaching inland Galician.

Correos has been dedicating a booklet to this route for many years. This year, the booklet is dedicated to the San Vicente de la Barquera church and San Toribio de Liébana monastery.

That is, the first of the stamps features the Church of Santa María de los Ángeles in San Vicente de la Barquera as its motif. Declared a place of cultural interest in 1931, it looks over the entire village and is surrounded by a wall in which you can see the well-known "puerta de los peregrinos” (door of the pilgrims), the one through which pilgrims on the Jacobean route must pass when making their journey. This church is one of most prominent examples of Gothic architecture in Cantabria and one of the symbols of St. James Way in northern Spain.

The second of the stamps is dedicated to the Monastery of Santo Toribio de Liébana. Not all routes of St. James’ Way lead to the apostle. Some, as in this case, branch out and change to the Lebaniego Way, a Jacobean pilgrimage path that offers the same fulfilment as if one were to arrive in Compostela but without leaving Cantabria.

The Monastery of Santo Toribio de Liébana preserves one of the most important relics of Christianity: the largest known piece of the Crucifix of Christ. For this reason,

many pilgrims on route to Santiago de Compostela via the northern route take a detour along the way to touch or kiss the wood on which Jesus was crucified. Since Pope Julius II granted the privilege to Saint Toribio de Liébana to celebrate its own Jubilee Year, many more pilgrims choose this route.