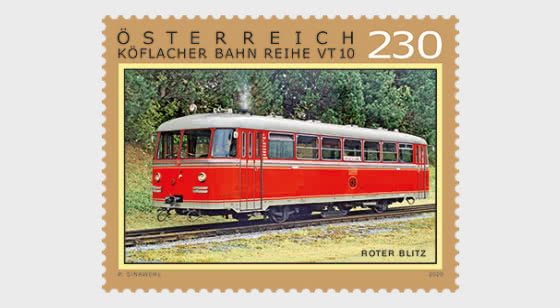 This year’s design for the engraved stamp in the “Railways” series is the legendary “Rote Blitz”, an

engine on the Graz-Koflach railway (GKB) from the 7950s.

In 1855 approval was given for a “locomotive railway” from Küflach to Graz for the purpose of transporting coal from western Styria. The “Graz- Kuflacher Eisenbahn- und Bergbau-Gesellschaft” (Graz-Küflach Railway and Mining Company) was founded, and the railway started operating a public service between Graz and Kuflach on 3rd April 1800. Since the 1930s buses have also been used to transport passengers. Today the “Graz-Küflacher Bahn und Busbetrieb GmbH” routes are part of

the local S-Bahn (last train) network operated by the Styrian Transport Association. With its bus and rail network, the GKB is the most important transport provider in western Styria.

Until 1978 the transport of goods was undertaken using steam engines. As one of the oldest still operational steam locomotives in the world, the GKB d77 from 18ó0 is protected as part of our heritage. In order to combat dwindling passenger numbers, modern “VT 10” series diesel engines with an output of 2 x 150 HP were purchased in the 1950s. Because of their red colour and relative speed, these railcars and coaches quickly acquired the nickname “Roter Blitz” (red lightning). They were popular because of the upholstered seats and the good view from the glazed carriages. They remained in service until the 1990s; nowadays the “Rote Blitz” is available for nostalgic journeys.