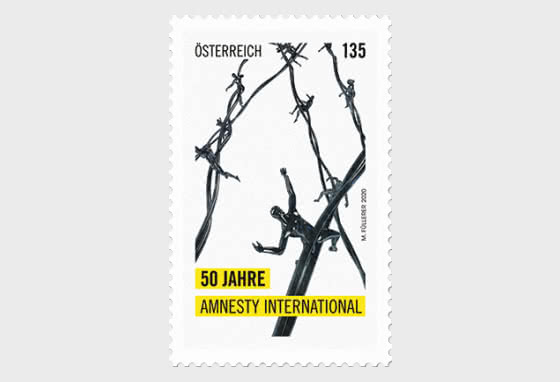 50 Years Of Amnesty International Osterreich - Set for only GBP £1.24

About 50 Years Of Amnesty International Osterreich

For 50 years Amnesty International has been advocating for the observance of human rights in Austria. Austrian Post is now honouring the organisation with a commemorative stamp.

On 10t h December 1948 the United Nations adopted the Universal Declaration of Human Rights, which is the basis of Amnesty International’s work. The globally active human rights movement is dedicated to the protection and defence of these rights, which apply to everyone. Amnesty draws attention to the importance of human rights in our daily life worldwide, investigating and making known violations. Through petitions and action, over eight million supporters around the world put public pressure on those responsible in order to combat abuses. In 1977 Amnesty International was awarded the Nobel Peace Prize for its campaign against torture.

In Austria, Amnesty is organised as an association. Staff and volunteers run campaigns and undertake action and lobbying work, coordinate the emergency response (in order to protect the lives of those in immediate danger) and, through the Amnesty Academy, contribute to educating the general public about human rights. International solidarity, impartiality, independence and mutual respect are some of the principles which Amnesty employs to campaign for a world in which all people can live in dignity and freedom and in which their rights are guaranteed by the state.