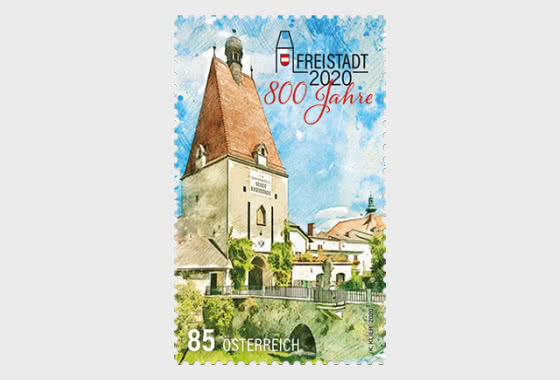 About 800 Years Of Freistadt

In 2020 the town of Freistadt in the Upper Austrian M’uhlviertel region is celebrating its 800'h anniversary. Austrian Post is congratulating it on this major anniversary by issuing a commemorative stamp.

While there are no specific documents recording the town’s founding, Freistadt became the seat of a regional court in around 1220. The town's founder is believed to be the Babenberg duke Leopold VI. Thanks to its position on a major trading route, Freistadt quickly became a flourishing border town, but after the Thirty Years' War its importance dwindled. Nowadays just under 8,000 people live in

Freistadt, which presents itself as an educational, cultural, trading and brewery town with a focus on preserving its medieval urban architecture. The 800t h anniversary will be celebrated with a major festival of traditions, a Burgergarde (civilian defence force) gathering, a traditional shooting match and a carnival parade organised by the Goldhauben- und Kopftuchgemeinschaft Freistadt, among other things.

The commemorative stamp shows the listed Linzertor (Linz Gate), a medieval town gate which has become the symbol of the town. At 28 metres in height, the gate, dating to the 13' h century, is one of the strongest gate towers in Central Europe. It was redesigned in the Late Gothic Style by the Freistadt architect Mathes Klayndl in around 1485. The statue over the gate shows St. Catherine of Alexandria, the patron saint of Freistadt.