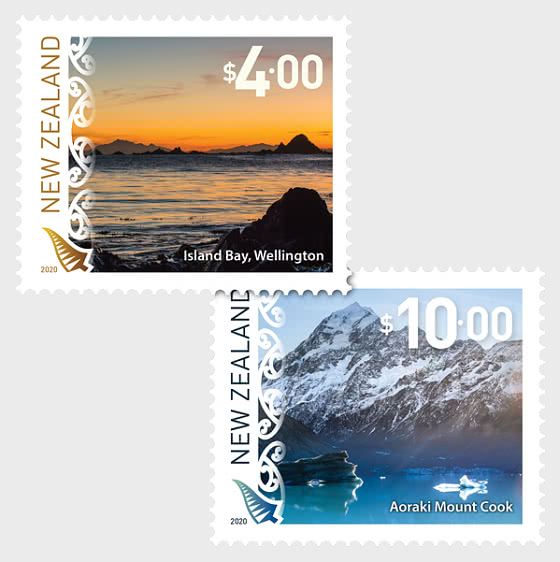 New Zealand’s main islands are each represented in the two 2020 Scenic Definitives, highlighting our tallest peak all the way down to the stunning sights at sea level.

Island Bay sits on the south coast of Wellington, New Zealand’s capital city. Since the creation of the 854 -hectare Taputeranga Marine Reserve in 2006, this area has been under the protection of the Department of Conservation, and marine life populations have blossomed. Its waters are home to a rich variety of marine life, from invertebrates like octopus, rock lobsters, crabs and starfish, to over 180 fish species. Almost half of New Zealand’s seaweed species can be found here, and the bay is also frequently visited by dolphins and whales.

On clear days, the South Island’s Kaikoura Ranges are visible from parts of the coast. Tapu Te Ranga Motu, the island the bay is named after, was once a battle refuge for Māori. The suburb later became home to European fishing communities, and a cluster of fishing boats is usually moored in the sheltered bay.

Te Waka-o-Aoraki is an early name for the South Island of New Zealand. According to local legend, the island is an overturned canoe and the rugged peaks of the Southern Alps are Aoraki and his three brothers, turned to stone by the south wind. Local iwi (tribe) Ngāi Tahu consider Aoraki to be the most sacred of their ancestors.

Aoraki Mount Cook National Park Reserve makes up the majority of New Zealand’s only international dark sky reserve. Its 23 peaks offer some of the best mountaineering landscape in New Zealand, and the entire park offers a base for accessible alpine activities. New Zealand’s highest mountain was the training ground of Everest pioneer Sir Edmund Hillary.