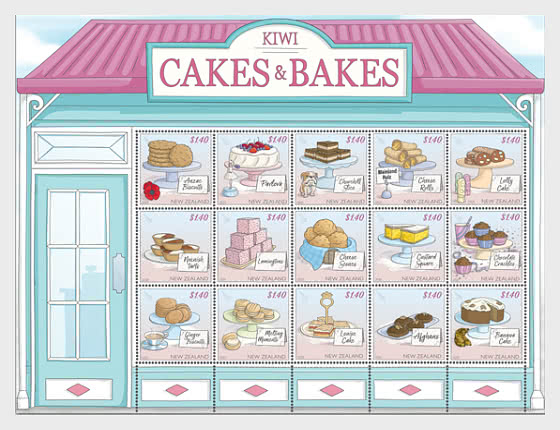 This stamp issue celebrates classic baked treats - favourites found in the little local cake shop or  lovingly made at home. Each stamp features a different item, presented as a work of art in the bakery window.

Treats like afghans, custard squares and pavlova are all familiar to New Zealanders. The stamps in this issue represent some local or regional favourites, some recipes from abroad, and others that were locally invented. Wherever their origins, the best recipes can be the ones passed down the generations or from friend to friend.

The baking tradition in Aotearoa New Zealand is alive and well - here we offer an issue that evokes flavourful memories. We invite you to simply feast your eyes or maybe satisfy your appetite with a little home baking of your own.

During the First World War, women posted parcels of biscuits to men serving overseas and the acronym ANZAC was applied to the Australian and New Zealand Army Corps in 1914. But the crisp, golden oatmeal biscuits did not acquire their name until they appeared as Anzac Crispies in the 1919 edition of the St Andrew’s Cookery Book. Anzac Biscuits live on in both countries.

Ownership of the original Pavlova has long been contested in the Antipodes. Culinary researcher Dr Helen Leach discovered a recipe for a meringue ‘Pavlova Cake’ in the 1933 Rangiora Mothers’ Union Cookery Book of Tried and Tested Recipes, sent in by Laurina Stevens. This was a few years after the visit of the Russian ballerina Anna Pavlova but two years before the first recipe for a meringue Pavlova appears in Australia.

Named after the UK prime minister who saw his nation through the Second World War, this baked, two-layered chocolate slice with a coconut filling can be found in mid-20th century New Zealand recipe books.

Cheese Rolls are a southern specialty. Recipes vary, but generally to make them spread slices of crustless white bread with a mixture of thick onion soup from a packet and grated cheese, then roll them up and bake briefly to melt the cheese and crisp the bread.

This children’s party favourite seems to have appeared in the 1970s. A mixture of crushed malt biscuits, sweetened condensed milk and melted butter with chopped marshmallow lollies is formed into a cylinder, rolled in coconut, chilled and then sliced.

Neenish Tarts were known as Nienich Tarts in Australia. Small baked cases filled with lemon-flavoured mock cream and distinctively iced – one half chocolate and the other vanilla – they are a graphic standout on any afternoon tea table.

Australian in origin, lamingtons’ first appearance seems to be in Queensland Country Life in December 1900, although similar small cakes iced and rolled in coconut are in earlier cookbooks. They took off quickly in New Zealand after an initial sighting in Dunedin’s Otago Witness in March 1902.

Scones are the perfect quick bread made possible by the invention of baking powder in the 1850s, and cheese scones are always near the top of any list of favourites.

Custard Squares comprise two crisp sheets of flaky pastry with a significant layer of rich vanilla custard in between. The top is iced and either sprinkled with desiccated coconut or decorated with lines of feather icing.

Cornflakes and rice bubbles were available in New Zealand from the late 1920s and were quickly adopted for biscuits and slices and even meringues. Involving no baking at all, Chocolate Crackles have been a children’s party favourite for decades.

Melting Moments have a pretty name and a distinctive appearance. They are small round, buttery biscuits, decorated with indentations made with the tines of a fork and sandwiched in pairs with butter icing. Related to Scottish shortbread, they have a more melting texture since they are made with icing sugar and cornflour.

In New Zealand home baking, desiccated coconut has historically provided an economical substitute for the ground almonds used in many European recipes, since coconuts are grown throughout the Pacific. It is included in the meringue topping over the jam and biscuit base of Louise Cake.

Afghans, like Chocolate Crackles, involve using commercially made breakfast cereals. Afghans are small, crisp chocolate cakes iced with chocolate icing and topped with a half walnut. The source of the name remains a mystery, though one theory is that returned soldiers saw a likeness to the hats worn by Afghan camel drivers in Egypt.

In New Zealand, countless over-ripe bananas are rescued by their inclusion in moreish cakes, loaves and muffins. Banana Cake filled with sliced bananas and whipped cream and iced with thin lemon icing was the favourite of a legendary New Zealander, Sir Edmund Hillary.