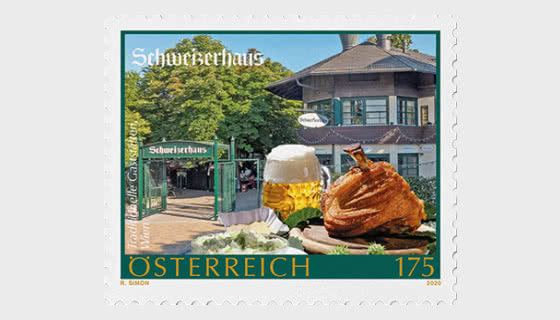 The "garden of the Viennese"

A true Viennese institution features as the design on this year's special stamp from the “Catering with tradition ”series: the venerable Schweizerhaus in Vienna's Prater.

The Schweizerhaus has a long history. As long ago as 1716, the British travel writer Lady Mary Montagu reported on a “Swiss hut” which had been established to cater for Swiss hunters. After the Prater was opened to the public by Emperor Joseph II in 1766, the “Zur Tobakspfeife” inn opened there in 1780, later being renamed “Zum Russland Kaiser”. During the early 1840s, the young architect Eduard van der Nüll, who later went on to build the Vienna State Opera, built a new public house in the architectural style of a Swiss chalet at this location, but it was destroyed in April 1945.

The Kolarik era started in 1920, exactly 100 years ago, when the Viennese master butcher Karl Kolarik took over the business, and the business in the Wurstelprater is still run by the Kolarik family today. The Schweizerhaus is particularly well known for the original Budweiser Budvar and its crispy “Original Schweizerhaus pork knuckle”. Set under ancient walnut and chestnut trees and located close to the main alley through the Prater, the extensive, shady beer garden invites customers to savour traditional Viennese and South Bohemian specialties such as tripe soup, pork casserole with cabbage, or dumplings filled with plum jam , all top quality, home-made food produced in-house.