150th Anniversary Of The Birth Of Franz Lehar - Set 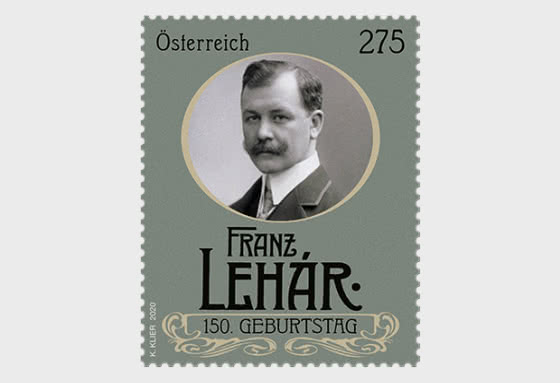 About 150th Anniversary Of The Birth Of Franz Lehar

The maestro of the operetta

Franz Lehór gave the world many entertaining operettas and unforgettable evergreen songs — and Austrian Post is honouring the composer with a commemorative stamp to celebrate the 75O'h anniversary of his birth.

Born in 1870 in Komáron in what is now Slovakia, as the son of an infantry bandmaster, Franz Lehár grew up in a musical environment from the start. By the age of twelve he was already studying violin at the Prague Conservatory, later becoming the youngest military bandmaster in the Austro-Hungarian Monarchy. He eventually settled in Vienna where he mainly dedicated himself to composing operettas. Along with Emmerich Kálmán, he is considered one of the main proponents of the silver age of operetta, which dates from 1900 to around 1940.

Lehár’s first major success came in 1905 with “The Merry Widow”, followed by many classics, which are still frequently performed to this day, such as “The Graf von Luxemburg”, “Gypsy Love”, “Der Zarewitsch” or “The Land of Smiles”. Many of his later tenor arias were written specifically for the Austrian opera singer Richard Tauber, with whom he was friends. In addition to operettas,

October 1948 in his home of choice, Bad lschl, where he had spent many summers and written most of his operettas. In accordance with his wishes, after his death the “Lehár-Villa” which he had lived in there became a museum.