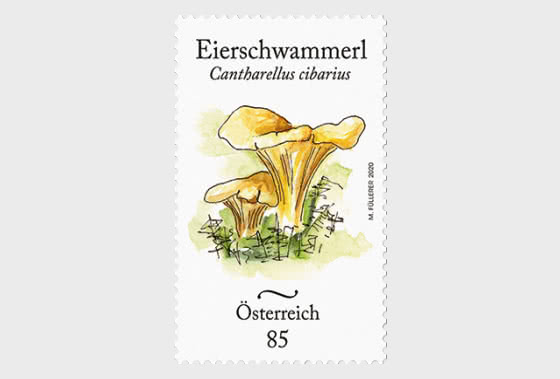 The brilliant yellow chanterelle mushroom is the first design in a new series of special stamps, “Austrian mushrooms“, which is meant to showcase the wide range of indigenous mushrooms.

The true chantere//e (Canthare//os cibarius), which in Austria is called the “Eierschwammerl”, literally meaning “egg mushroom”, because of its yellow yolk-like colour, is an excellent edible mushroom. Its German name, “Pfifferling”, is derived from its mildly peppery taste. In young specimens the cap is dome-shaped, whilst in older ones it is funnel-shaped. The lamella-type gills on the underside blend into the stalk. These mushrooms are often found in large groups in the moss under spruce, copper beech, oak, pine or fir trees. They may be confused with the inedible false chanterelle or with the poisonous jack-o’-lantern mushroom, which grows on wood.

When gathering mushrooms in the forest, one must take care not to damage the mycelium in the ground and avoid harvesting all the mushrooms from a single patch in order to ensure that the mushrooms continue to grow there in future. Furthermore, any legal provisions and any bans imposed by the owner of the forest must always be complied with.

Chanterelles are a very versatile ingredient in the kitchen. Whether they are used for a classic chanterelle goulash, in meat dishes, sauces or egg-based dishes, the chanterelles have a delicate spicy flavour. They are easily preserved in vinegar or oil and can also be blanched and frozen.