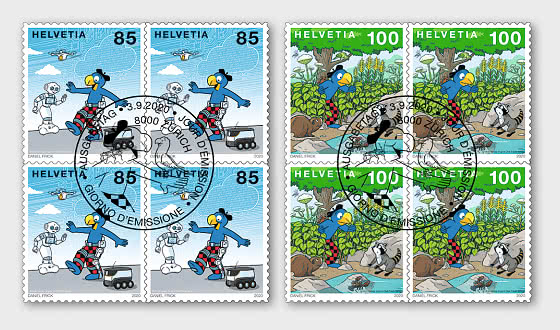 About Globi - Block of 4 CTO

If Globi were anyone else, he would be one of Switzerland’s senior citizens by now. After all, he first appeared in 1932. But because he’s Globi, he still tackles the latest issues, which children nd inspiring and enthralling in equal measure. That’s also true of the two books whose 2020 covers appear on two special stamps.

The educational edition “Globi und die Roboter” (Globi and the Robots) was published at the end of April. It explores digitization, articial intelligence and intelligent machines, explaining how everything works in a way that appeals to children. The book covers all aspects that the children themselves can relate to.

The educational edition “Globi und die neuen Arten” (Globi and the New Species) was published two years ago. In this book, children learn that Christopher Columbus was one of the first people to take animal and plant species to the New World. Numerous examples describe which types of food immigrants could serve in their new homes, why some species are more aggressive than others and which ones adapt and inte- grate into their new surroundings.

It is not the first time that Swiss Post has issued Globi special stamps. A stamp costing 0.70 francs was issued in 1997 to mark the “Globi bei der Post” (Globi at the Post Offce) edition. The stamp was a huge success, and the book sold over 80,000 copies within a year.

Globi is particularly popular in German-speaking Switzerland and brings together young and old. Everyone can recount their own Globi adventures,has explored new worlds with Globi, has learned something from him or experienced or discovered something new with him.