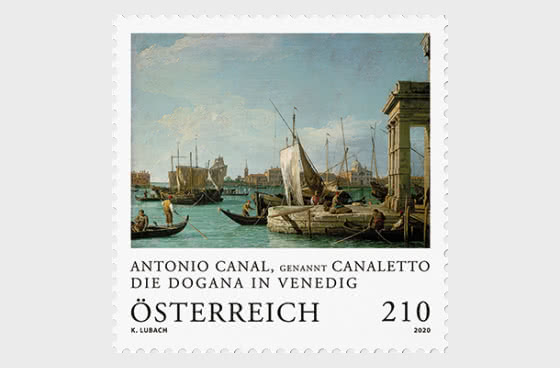 About Antonio Canal a. k. a. Canaletto – The Dogana at Venice

Giovanni Antonio Canal was one of the most important proponents of veduta painting. A detailed view of his home town of Venice adorns this stamp from the “Old masters”series, which has been embellished with engraving.

Antonio Canal was born in Venice in 1697 as the son of a theatrical set painter who also trained him. A trip to Rome resulted in the young painter, who soon adopted the name Canaletto, taking up landscape painting and, in particular, the representation of realistic city views, the so-called veduta, for which he is known today. However, the famous Canaletto View, a view of Vienna, was, in fact, produced by his nephew, Bernardo Bellotto, who was also a painter and used the same pseudonym. Antonio Canal died in 1768 in Venice, where he had spent most of his life, apart from a few years in London. Thanks to his patron, the art dealer and consul Joseph Smith, Canaletto’s works were very popular in England.

The painting “The Dogana at Venice” dates from the period 1724/1730 and is on display in Vienna’s Kunsthistorisches Museum. In the foreground is the busy square in front of the Dogana (customs building) at the mouth of the Grand Canal, while behind this, Giudecca island and the Zitelle church can be seen. By that time Canaletto was already a successful veduta painter who had developed a unique style with his precise depictions and his radiant, bright colours.