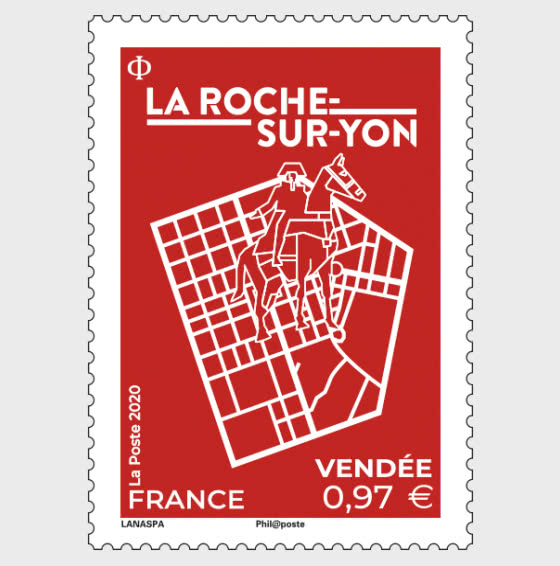 "Installed on a height overlooking the passage of the Yon, La Roche-sur-Yon was in the 11th century, the center of a vast seigneury which obtained in the 16th century the honorary title of principality. Until the end of the 18th century. , La Roche-sur-Yon belongs to members of the royal family (Bourbon-Montpensier, Orléans, Bourbon…).

The fate of the city changed after the Revolution: on May 25, 1804, Napoleon I decided to make the city the new prefecture of Vendée. Focusing on a locality that does not exceed a thousand inhabitants but located in the heart of the Vendée, he wishes to appease and develop a region marked by several years of civil war.

The engineers of the Ponts-et-Chaussées were then responsible for imagining a city for 15,000 inhabitants. They design a checkerboard plan delimited by five sides, the Pentagon. In the center, a square 140m wide by 200m long is bordered by the main public buildings and four roads are oriented towards the cardinal points, connecting the main towns of Vendée and neighboring departments.

Halfway between Nantes and La Rochelle, close to the ocean, La Roche-sur-Yon today has nearly 55,000 inhabitants, in an agglomeration of almost 100,000 inhabitants.

Its city center is marked by neoclassical modernity (mid 18th century – mid 19th century) and the antique ideal. Banking on robotic and digital industries, on culture and green heritage, the city is reinventing itself!

Place Napoléon has evolved into a vast garden with ponds populated by mechanical animals (hippopotamus, ibis, crocodiles, etc.), works by François Delarozière, artistic director of the La Machine company. The emblematic buildings lining the square come back to life with the creation of a museum, a cinema, leisure activities, shops, administration ... "