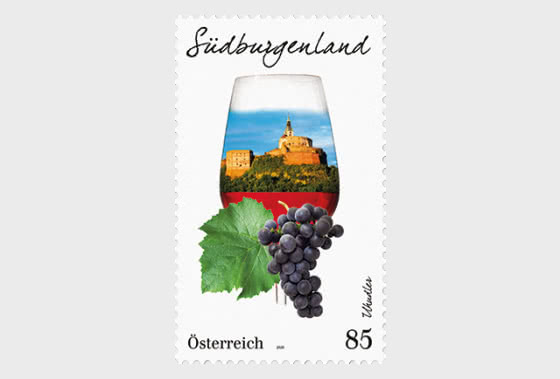 From a tradition to a cult drink

A particular speciality from the South Burgenland region is the incomparable Uhudler, which is the subject of this year’s special stamp from the “Austrian wine regions”series.

Uhudler has the phylloxa aphid to thank for its existence after the latter almost wiped out European grapevines at the end of the 1 t h century. As a result, robust, phylloxa-resistant

varieties from America were imported to replace them, eventually being hybridised during the 20th century through grafting with indigenous varieties. The unmodified varieties are known as direct producers, and it is from these that Uhudler is made.

A fruity wine, Uhudler impresses with its unmistakeable aroma of wild strawberries and raspberries. Depending upon the variety and region, its colour ranges from pale yellow through delicate pink to brick red; the flavour is dry with a pronounced acidity, and is described as “foxy”. Legend has it that the wine got its name from the wives of the vintners, whose husbands, after having partaken copiously of the wine, allegedly looked like eagle owls (German: Uhu). Uhudler was banned for a time as it was falsely claimed that it was injurious to the health. In 1992 it was finally incorporated into the Austrian Wine Law. Only certain direct producer varieties are authorised for making Uhudler, and only certified wines from particular municipalities in South Burgenland are allowed to bear the protected name. The special stamp shows the historic castle in Güssing, one of the municipalities which produces the wine.