250th Anniversary Of The Birth Of Ludwig Van Beethoven - Set 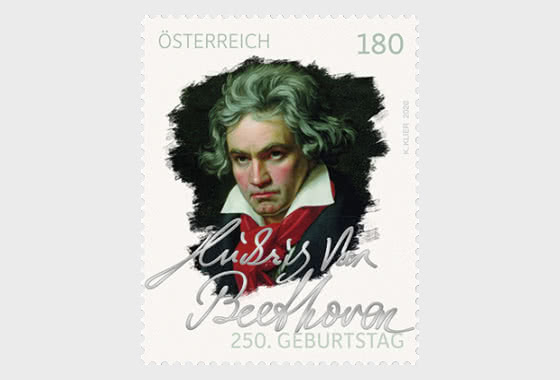 250th Anniversary Of The Birth Of Ludwig Van Beethoven - Set for only GBP £1.59

About 250th Anniversary Of The Birth Of Ludwig Van Beethoven

Austrian Post is celebrating the 250'h anniversary of the birth of the great composer by issuing a commemorative stamp, embellished with foil embossing, which shows the famous portrait by Joseph Carl Stieler.

Beethoven was born in 1770 in Bonn. His musical talents were encouraged from an early age, and even as a child he was already giving piano recitals. In 1792 he moved to Vienna, where he found support among the nobility. Among other things, he took lessons in composition from Joseph Haydn and quickly distinguished himself as a successful composer. However, his health soon began to deteriorate and a serious hearing impairment ultimately resulted in almost complete

deafness. Despite this tragedy he continued to work tirelessly and with a high level of perfectionism on his compositions until shortly before his demise on 26th March 1827. With many

of the public turning out to mourn him, Beethoven was initially buried in Wahring cemetery, but was subsequently laid to rest in a grave of honour in Vienna’s Central Cemetery in 1888.

Ludwig van Beethoven was a key proponent of Viennese Classicism and a forerunner of the Romantic era. He left behind an exceptionally comprehensive oeuvre that includes not only his nine famous symphonies but also numerous piano concertos and sonatas, string quartets, songs, the opera Fidelio and his Lissa solemnis. One of his most famous works is undoubtedly his ninth symphony, in the last movement of which a choir sings Friedrich Schiller’s poem “Ode to Joy”. An instrumental version of this is today used as the official European anthem.