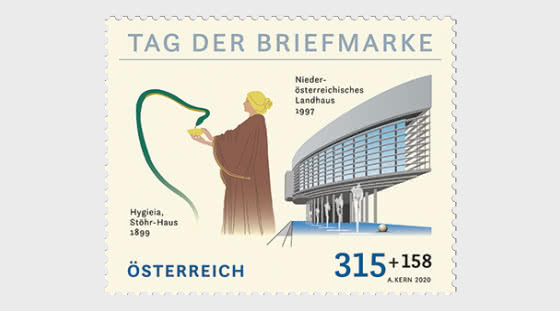 About Day of the Stamp - St. Polten

On the occasion of the 70th anniversary of the St. Pölten stamp collectors’ club (BSV St. Pölten), this year’s stamp for the day of the stamp ce/ebrates the city of St. Pölten, which will also be the venue for this year’s ÖVEBRIA.

The two motifs on the stamp are meant to illustrate the span of 100 years. The past is symbolised by the relief carving of Hygieia feeding an Aesculapian snake which can be seen on the Stöhr House in St. Pölten. This residential building, dating from 1899, is considered the finest house in the Üugendstil in the city and was designed by Joseph Maria Olbrich, the architect behind Vienna’s Secession building. In 1986, following a referendum, St. Pölten was chosen as the regional capital of Lower Austria, and the second motif shows the contemporary government building in the new administrative district in St. Pölten, which has been the seat of the Lower Austrian regional government and of the state’s parliament since 1997 and was built to plans by the architect Ernst Hoffmann.

The borders of the mini sheet are decorated with the coats of arms of Lower Austria and St. Pölten as well as attractions from the capital city: the Baroque Holy Trinity column, the historic Riemerplatz, the state theatre, the town hall with its renaissance tower as the symbol of the city, plus the modern state museum and the Klangturm in the administrative district. As it is every year, the supplement in the amount of 1.58 Euro will be used to promote philately.