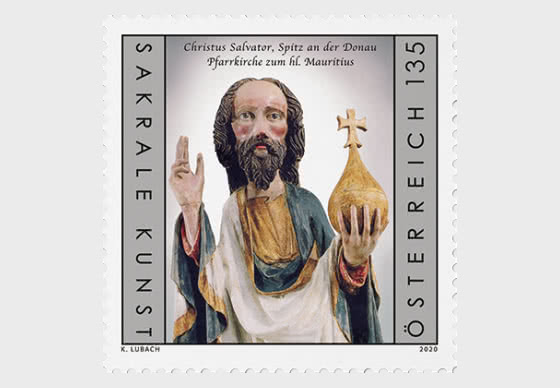 Christ the Saviour – Spitz an der Donau, the Parish Church of St. Maurice - Set for only GBP £1.21

About Christ the Saviour – Spitz an der Donau, the Parish Church of St. Maurice

In its apostle cycle, the parish church in Spitz an der Donau houses a significant work of art from the Middle Ages. Embellished with engraving, the stamp from the “Religious art”series shows the sculpture of Christ the Saviour that stands at the centre.

As long ago as 1163, a Romanesque wooden chapel existed in Spitz an der Donau in the Wachau region, which was likewise dedicated to St. Maurice. Until 1803 the parish church was incorporated into the Bavarian Niederaltaich Benedictine Abbey, whose estate in the Wachau

extended from Aggsbach to Spitz. The oldest part of today’s late Gothic hall church is the West Tower, which dates from around 1300. The three-aisled nave dating from the 15th and 16th

centuries has a particular feature: before it reaches the chancel it turns about twenty degrees to the north, presumably due to some characteristic of the underlying land. Particularly noteworthy features include the Gothic groin and net vaults and the Baroque altars. The altar painting on the high altar, consecrated in 1724, shows the martyrdom of St. Maurice and was created in 1799 by Martin Johann Schmidt, also known as “Kremser Schmidt”.

Early Gothic sculptures of Christ and the twelve apostles adorn the parapet of the Gothic organ loft. Situated in blind niches, the wooden figures from around 1400 largely still retain their historic colouration. They are considered the most important apostle cycle of this kind in Austria.