100 Years Since The Carinthian Plebiscite - Set 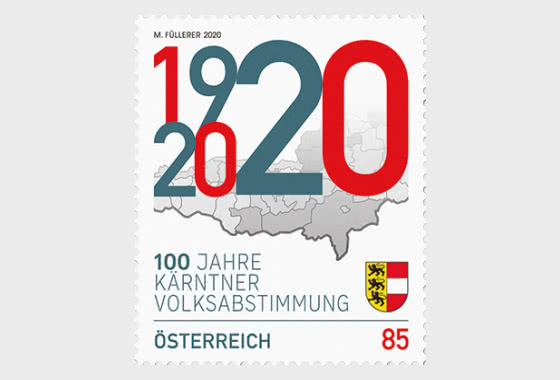 About 100 Years Since The Carinthian Plebiscite

The people have decided

remaining part of Austria is being celebrated with a commemorative stamp.

After the end of the First World War, Carinthia announced in November 1918 that it was joining the Republic of German-Austria. When, shortly afterwards, troops from the “State of Slovenes, Croats and Serbs” occupied the southern part of the state, the people of Carinthia offered armed resistance in the “Kärntner Abwehrkampf” or “Carinthian defensive struggle”. In the Treaty of Saint-Germain of 1919 it was ultimately agreed that a referendum on whether southern Carinthia

should remain part of Austria would be held, and this was put into effect on 10th October 1920 in

the southern Carinthian region to the south-east of Klagenfurt. Despite the fact that the majority of the population were Slovene-speakers, the result of the plebiscite, in which almost 100 per cent of those eligible voted, was a majority of 59 per cent in favour of southern Carinthia remaining part of Austria. Almost half of Carinthia’s Slovenians had likewise voted for this option. The renewed attempt by Yugoslavia to claim territory at the end of the Second World War was prevented by the Alfies.

Even before the plebiscite, the Carinthian regional government had promised to protect the rights of minorities, but this was not always put into practice accordingly. For example, it was not until the 1970s that the first bilingual place name signs were put up. The resulting conflict over place name signs was finally brought to an end by means of a constitutional law in 2011.