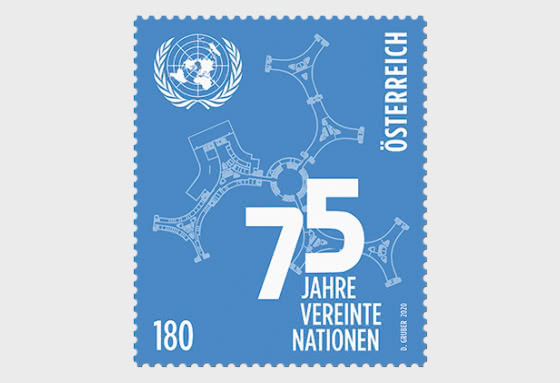 About 75 Years Of The United Nations

For peace and security

In 1945 the United Nations was established as an international organization to maintain peace and stability. To celebrate the anniversary, Austrian Post is dedicating a commemorative stamp to the UNO.

Even while the Second World War was still in progress, the US president Franklin D. Roosevelt and the British prime minister Winston Churchill drew up the Atlantic Charter, setting out principles for international policy and the securing of peace. On 26th July 1945, at the conference in San Francisco, 50 states signed up to the United Nations Charter with its 111 articles as the founding charter, which came into effect on 24th October 1945. Austria joined the UNO in 1955.

The main aims of the United Nations, usually abbreviated to UN or UNO for United Nations Organization, are to ensure world peace and international security, to develop friendly relationships between nations, to work together across the nations to solve global problems and to support human rights, as well as to agree on the efforts to be undertaken by the nations in order to put these shared goals into practice. Its headquarters are in New York, but it also has offices in Geneva, Nairobi and Vienna. The United Nation’s most important bodies are the UN General Assembly, the UN Secretariat, the International Court of Justice in the Hague, the Security Council and the Economic and Social Council. The graphic design on the commemorative stamp shows a top-down view of the United Nations offices in Vienna, the “UNO City”.