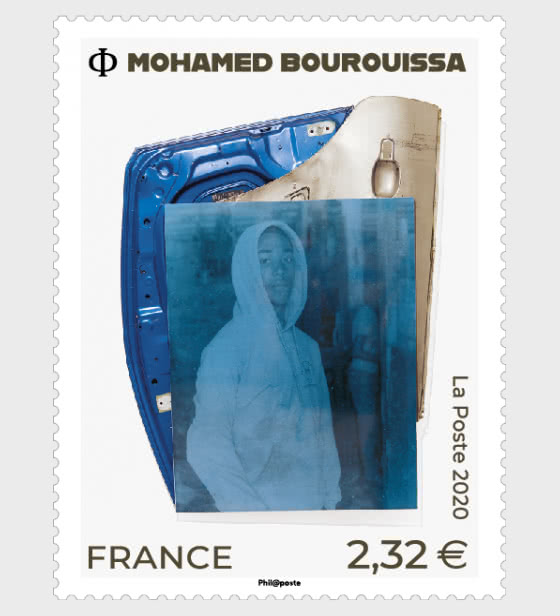 "In French philatelic production, the portrait holds a privileged place and follows different currents. A traditional current represents the allegorical figures of the Republic. A second current expresses glorious and fighting France. Finally, a third current, linked to the democratization of the portrait, sees the appearance of celebrity images.

For the past fifteen years, Mohamed Bourouissa has been exploring the concepts of portrait and monument in a transversal manner. How, why and who to portray, who to celebrate?

His approach is nourished by his knowledge of history or the stories of the portrait. He looked at Caravaggio, Manet, Poussin, and drew the compositional lessons of the classical portrait.

The We are Halles (2003-2005) and Périphérique (2005-2009) series represent individuals and communities, cultures and subcultures from the Parisian suburbs. Mohamed Bourouissa strives to give and share a different image of these communities, his relatives, these territories, which invites us to rethink the image and identity of the periphery. His project consists of giving an image to those who have been deprived of it, the model of painting allowing him to insert them into a system of codes and representations from which they were excluded.

The image that Mohamed Bourouissa chose for his stamp is the portrait of a young black man, wearing a "hoodie". This almost heraldic, Watteauesque image comes from the Horse Day project (2015) for which Mohamed Bourouissa documented for eight months in a neighborhood of Philadelphia (USA), Fletcher Street, a community of “black urban cowboys”, as there are some. in many American cities, who appropriate urban space from the heights of the horses they raise.

This portrait, titled Zamer (2016), is itself taken from the series The Hood, for which Mohamed Bourouissa printed on the hoods of automobiles, other icons of America, the portraits of the protagonists of the Horse Day project.

By inserting Zamer into the pantheon of philatelic portraits, Mohamed Bourouissa gives visibility not only to one face but to all faces that have until now been ignored in official representations.