Christmas – A Winter Landscape with a Bird Trap - Set 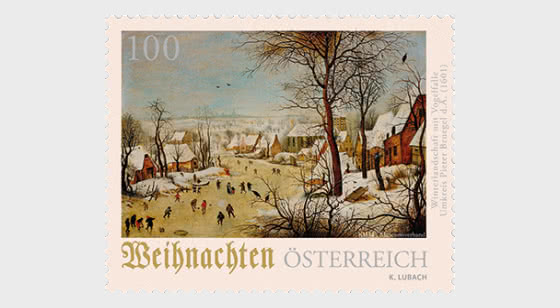 Christmas – A Winter Landscape with a Bird Trap - Set for only GBP £0.88

About Christmas – A Winter Landscape with a Bird Trap

A masterpiece of Flemish painting adorns this year’s stamp on the topic of art: a wintry village scene with a bird trap depicted in pale colours.

The painting was originally attributed to Pieter Brueghel the Younger (c. 1564/65 to 1638), but the attribution is not secure. Nevertheless, it is believed to originate from the circle surrounding his father Pieter Bruegel the Elder. There are many versions of the scene, varying only slightly from each other, and many come from the studios of the Brueghel family dynasty. The design on the stamp shows the painting dated 1601 housed in the portrait gallery of the Kunsthistorisches Museum in Vienna.

The illustration shows a village scene in winter; the lighting is muted and gentle. People are skating or playing on the ice, their dark clothing making them stand out clearly from the primarily light, wintry colours of their surroundings. The banks of the frozen river are scattered with trees and snow-covered houses. Beneath the dark, bare trees a wooden board which has

been propped up can be seen, a bird trap surrounded by lots of birds. In the foreground two black birds are seated on the branches of a tree, at first glance barely distinguishable from the ice skaters and appearing to be mingling among them. Winter landscapes of this type were a popular genre in the art of theU h century during the “Little Ice Age”.