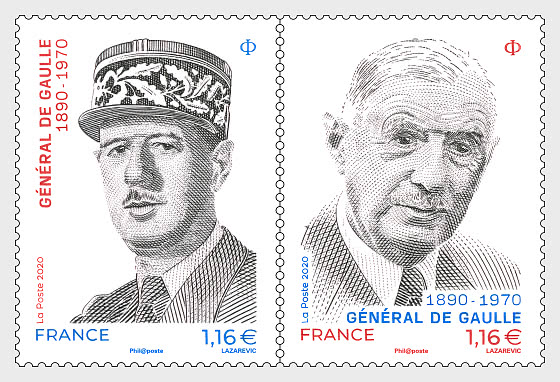 A very tall man. Great anyway. These words, uttered by Jean Moulin after his meeting with the leader of Free France in 1941, perfectly define Charles de Gaulle, whose journey merges with the history of France. Born in Lille in 1890, into a pious and patriotic family, the young Charles chose the path of arms in order to serve his country. Taken prisoner in Verdun during the First World War, he tried five times to escape the German fortresses, always taken again to his dismay. An unconventional officer, annoying a routine staff that swears only by defense, he advocates the formation of a mechanical force concentrating the tanks. Ironically nicknamed "Colonel Motor" by his detractors, de Gaulle demonstrated the relevance of his ideas when, on May 17, 1940, at the head of an armored unit, he managed to stop the panzers. But it's too late. As France collapsed and Pétain demanded an armistice, he flew to London to continue the fight there. "The Man of Destiny," as Churchill calls him, on June 18, 1940, uttered an appeal that ignited the flame of the Resistance amid the darkness of the debacle. Now he is the man who said no, the leader of Free France, the one who saves France's honor and manages to place it in 1944 on the winning side. Head of the provisional government of the Republic, from June 1944 to January 1946, applying the economic and social program of the Resistance, de Gaulle returned to power in 1958 and founded the Fifth Republic. President for more than ten years, he defended a policy of national independence and power: "France cannot be France without greatness. "Upon the announcement of his death, on November 9, 1970, his successor Georges Pompidou declared:" France is a widow. "The man who had a certain idea of ​​France is now a universal reference. "I am a man who does not belong to anyone and who belongs to everyone," he said.