Christmas – The Birth of Christ - Set 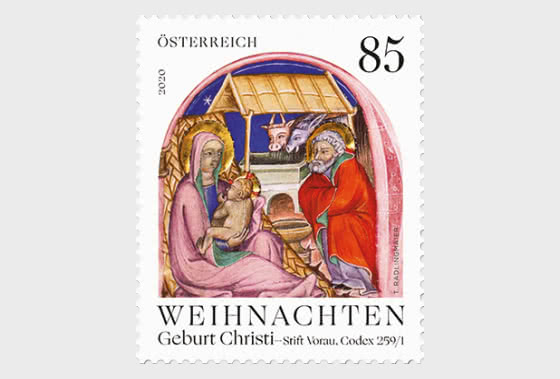 About Christmas – The Birth of Christ

A real treasure from the art of sacred book illumination is featured on this Christmas stamp: a medieval depiction of the birth of Christ in an initial from Codex 259/7 from the library of Vorau Abbey.

The holy family is depicted against a blue background accompanied by an ox and a donkey. The work in which this and many other artistic initials can be seen is a four-volume antiphonary, a

collection of liturgical songs and music in Latin. The manuscript was produced on parchment in the 14t h century for the monastery in Vyšehrad, Prague. In 1435 it was acquired by Provost

Andreas von Pranbeck for Vorau Abbey, where, between 1496 and 1498, it was adapted for the Salzburg Liturgy. Each of the four volumes weighs around 22 kilogrammes, is bound in pigskin and is fastened with iron clasps.

The impressive library of Vorau Abbey in eastern Styria houses an important collection of manuscripts, incunabula and printed books. Particularly worthy of mention are the Vorau Manuscript, a collection of early medieval German poetry, and the Latin Kaiserchronik (imperial