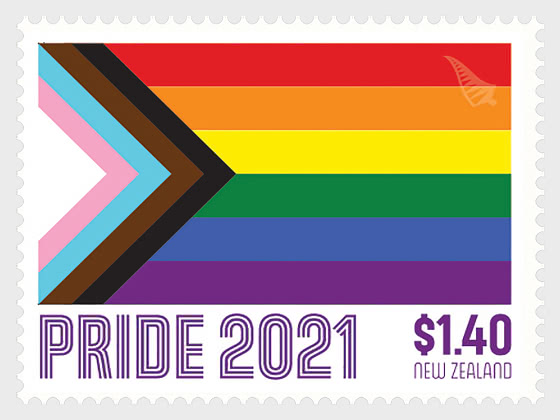 About 2021 Pride Set of Mint Stamps

The year 2021 marks 35 years since Homosexual Law Reform Bill was passed in New Zealand, a landmark piece of legislation that meant homosexual men could now live without fear of prosecution.

Although the Stonewall riots (New York, 1969) are the widely considered the birth of the international pride movement, New Zealand’s history of activism from its LGBTQIA+ community predates this historic event. Social and political groups for homosexuals began here when the Dorian Society form in 1962, and other informal and organised networks existed well before 1969, laying the foundation for the pride movement in Aotearoa today.

In the early 70s, lesbian and Māori rights activist and academic Ngahuia Te Awekotuku catalysed gay liberation in Aotearoa. In 1972, after her US visa was stalled on the grounds of ‘sexual deviance’, she gave a rousing speech to students at the University of Auckland, challenging them to be open about their homosexuality. By the mid-1970s several gay liberationist groups had formed. The first Gay and Lesbian Fair in 1986 (now Wellington’s Out in the Park) was established to raise support for Homosexual Law Reform, which passed that year. The bitterly debated Homosexual Law Reform Bill, a private member’s bill introduced by MP Fran Wilde, was introduced to the House of Representatives on 8 March 1985. It passed on 9 July 1986, by 49 votes to 44.

From this point onwards, pride festivals and fairs flourished. Many of these festivals came as a response to the AIDS pandemic. Founded in 2000 as part of the Hero festival, Big Gay Out was taken over by the New Zealand AIDS Foundation in 2003 and continues to be celebrated annually, raising awareness for AIDS prevention in Aotearoa. Today, these major festivals and accompanying street marches take place in around the country every February and March.

While the Homosexual Law Reform Bill was a landmark moment in the history of gay liberation, the movement has grown to encompass a multitude of groups who face discrimination based on their gender identity or sexual orientation. Gilbert Baker’s six-stripe pride flag has been the internationally recognised symbol of LGBTQIA+ communities for over 40 years, with its six distinct colours - red, orange, yellow, green, blue, and violet. Pictured on the 2021 Pride stamp, the Progress Pride Flag is an evolution of this symbol, with five arrow-shaped lines added to the six-coloured Rainbow Flag to focus on the current needs of the community. Designed by Daniel Quasar in 2018, the flag incorporates the pink, blue and white, alongside black and brown stripes from the More Color, More Pride Flag designed by Amber Hikes to highlight racism within queer communities. The black stripe also acknowledges those lost during the AIDS crisis, inspired by the Victory Over AIDS Flag by Sergeant Leonard Matlovich. The added colours form a chevron arrow at the hoist of the flag, pointing to the right to show forward movement, while being situated along the left of the flag to show that progress still needs to be made.