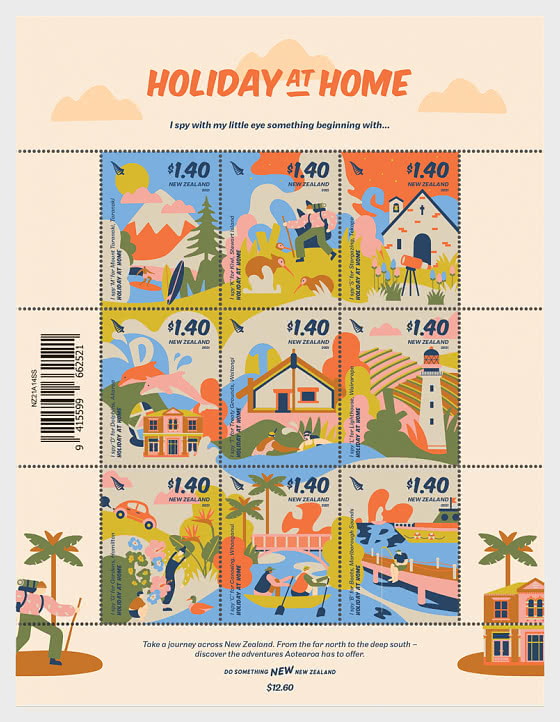 About 2021 Holiday at Home Set of Mint Stamps

Kiwis country wide are being encouraged to give domestic tourism a go and take the opportunity to discover something they’ve never seen before, be wowed by New Zealand’s spectacular natural wonders or simply find new ways to have fun.

With a play on the classic road trip game ‘I spy’, these nine charming stamps highlight some of the major holiday hotspots and hidden gems of Aotearoa New Zealand.

$1.40 I spy ‘M’ for Mount Taranaki, Taranaki - New Zealand’s contrasting landscapes and geological wonders are one of the best reasons to travel the length of the country. Mount Taranaki is a perfectly formed dormant volcano, pleasing to look at and New Zealand’s most frequently climbed peak.

$1.40 I spy ‘K’ for Kiwi, Stewart Island – Although we’re named after them, most New Zealanders have never seen a kiwi in the wild. Rakiura/ Stewart Island is one of the only places in Aotearoa where you can see these usually nocturnal birds in daylight.

$1.40 I spy ‘S’ for Stargazing, Tekapo - Lake Tekapo is well known as one of the best places in New Zealand to stargaze – you can get an even better look at the cosmos through the Mount John observatory telescope.

$1.40 I spy ‘D’ for Dolphins, Akaroa – Among other amazing sea life, Akaroa is where you can spot the world’s smallest and rarest dolphin – Hector's dolphin.

$1.40 I spy ‘T’ for Treaty Grounds, Waitangi – New Zealand’s most important historic site is a must-see for all Kiwis, with enough to explore for one or two days. Including museums, a carving studio, the Treaty House, Te Whare Rūnanga (Carved Meeting House), traditional Māori waka taua (war canoes) and a full programme of tours and cultural performances.

$1.40 I spy ‘L’ for Lighthouse, Wairarapa – Several of New Zealand’s charming classic lighthouses can be viewed on various parts of the Wairarapa coastline.

$1.40 I spy ‘G’ for Gardens, Hamilton – The Waikato’s most popular tourist attraction is a collection of immaculately kept gardens that explore the history, context and meaning of gardens around the world.

$1.40 I spy ‘C’ for Canoeing, Whanganui – Float down New Zealand’s longest navigable river in a canoe or kayak and visit the Bridge to Nowhere.