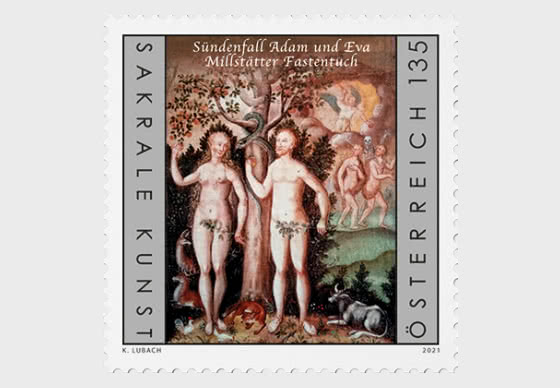 About The Millstatt Lenten Veil, Adam and Eve

The Bible in pictures

A particularly sacred art treasure is the focus of this stamp from the series “Religious art in Austria”: the Mi//statt Lenten veil, which features motifs from the Old and the New Testament.

The parish church of Millstatt, formerly the church of the abbey of Millstatt, which was dissolved under Joseph II, is home to the Millstatt Lenten veil, one of the largest preserved pictures on canvas in the Alpine region. AI a size of around 8.4 by 5.7 metres, it shows 41 scenes from the Bible arranged in 7 rows. The veil was created in 1593 by Oswald Kreusel (Kreuselius). lt was painted with watercolours on canvas and is reminiscent of the woodcarvings of famous Renaissance artists such as Albrecht Dürer or Lucas Cranach. The Lenten veil is still used for liturgical purposes, concealing the high altar during the Lenten period before Easter. The first row shows the story of the Creation, including the design shown on the stamp, the fall of man.

Millstatt Abbey was probably founded in the 11th century and was once a Benedictine abbey. Under Emperor Frederick III the Order of Saint George took over the abbey in 1469, and it was later run by the jesuits from 1598 until its dissolution in 1773. In addition to the Lenten veil, other items of art historical importance include the Romanesque cloister, the fresco of the Last Judgement in the former abbey church and the early Middle High German Mi//statter Handschrift(Millstatt Manuscript), now housed in the Carinthian State Archives.