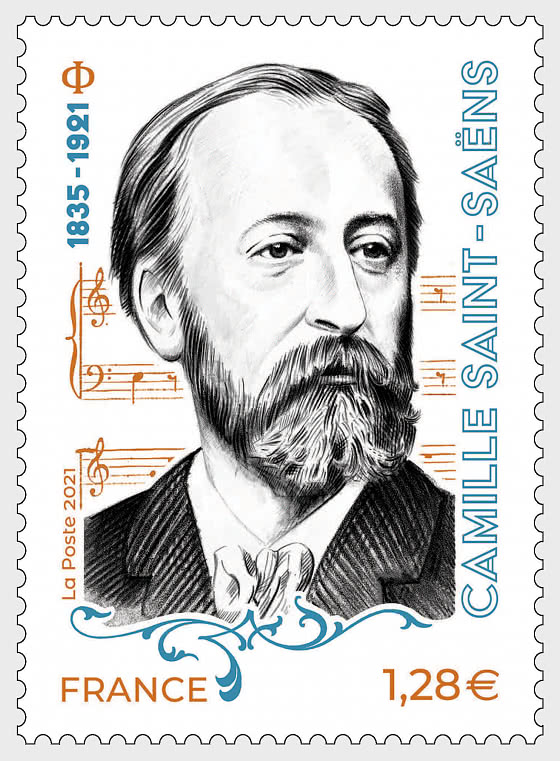 “A child of fragile health, suffering from tuberculosis like his father, Camille Saint-Saëns will nonetheless be a piano prodigy at the age of five. He will give his first concert at the age of eleven in 1846. Organist for twenty years at the church de la Madeleine, he resigned when one of his friends, Albert Libon, Postmaster General, bequeathed him 100,000 francs in 1877 on the condition of devoting himself exclusively to composition.

Challenge met ! This musical genius was indeed a prolific composer, tackling all genres: symphony, concerto, chamber music, opera ... His masterpiece, Samson et Dalila (1876), remains the most popular opera in the French repertoire. Among his most famous compositions is one reissued today intended for young audiences, Le Carnaval des Animaux (1886), a symphonic suite conceived as a parody entertainment for Mardi Gras. Saint-Saëns refused to be played during his lifetime, with the exception of piece 13, Le Cygne, which will become a must for generations of cellists. Let us also quote this marvelous and very spirited Concerto n ° 5 for piano, opus 103, known as L’Égyptien (1896) because it was composed in Luxor, which he performed at the Salle Pleyel for the anniversary of his first concert.

Entering modernity in the late 19th century, he will be the first composer of symphonic poems in France with Le Rouet d´Omphale but especially the fantastic and bittersweet Danse macabre (1875), to a text by Henri Cazalis.

A pioneer, he was also a pioneer in a new genre, film music. In the golden age of silent cinema, in 1908, Camille Saint-Saëns composed the music for André Calmettes' film The Assassination of the Duke of Guise. There was no question of soundtrack, the music was played live in the room, during the screening. It has been referenced ever since under the title Opus 128 for strings, piano and harmonium.

The Master was in Algeria, his favorite residence, when he bowed out on December 16, 1921 at the end of a very rich musical journey, offering us an imposing work that we never stop rediscovering."