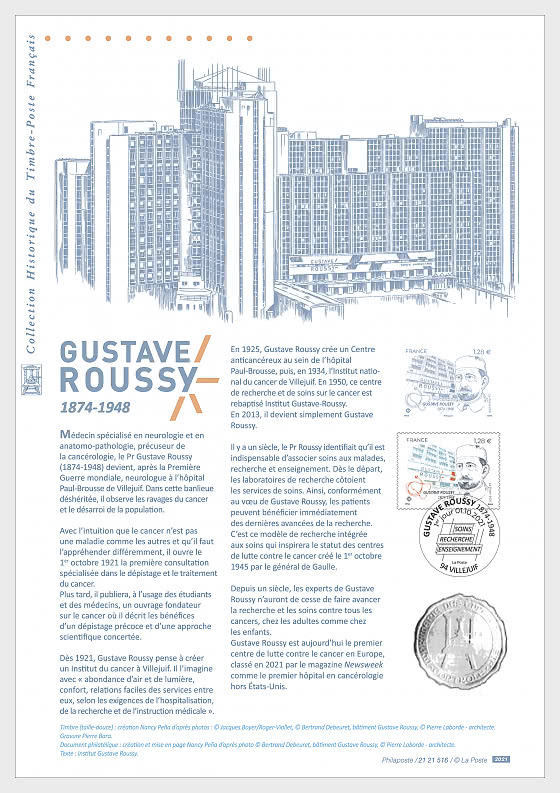 "Doctor specializing in neurology and anatomo-pathology, Professor Gustave Roussy (1874-1948) became, after World War I, neurologist at the Paul-Brousse hospital in Villejuif. In this deprived suburb, he observed the ravages of cancer and the disarray of the population.

With the intuition that cancer is not a disease like any other and that it should be understood differently, in 1921 he opened the first consultation specializing in cancer screening and treatment. He would later publish a seminal work on cancer for use by students and physicians in which he described the benefits of early detection and a concerted scientific approach.

As early as 1921, Gustave Roussy thought of creating a Cancer Institute in Villejuif. He imagines it with "abundance of air and light, comfort, easy relations between departments, according to the demands of hospitalization, research and medical instruction".

In 1925, Gustave Roussy created an anticancer center within the Paul-Brousse hospital, then, in 1934, the National Cancer Institute of Villejuif.

In 1950, this cancer research and care center was renamed the Gustave-Roussy Institute.

In 2013, he simply became Gustave Roussy.

A century ago, Professor Roussy identified that it is essential to combine patient care, research and teaching. From the outset, research laboratories work alongside healthcare services. Thus, in accordance with Gustave Roussy's wishes, patients can immediately benefit from the latest advances in research. It is this model of research integrated into care that will inspire the statute of the centers for the fight against cancer created on October 1, 1945 by General de Gaulle.

For a century, the experts at Gustave Roussy have worked tirelessly to advance research and treatment against all cancers, in adults and children alike.