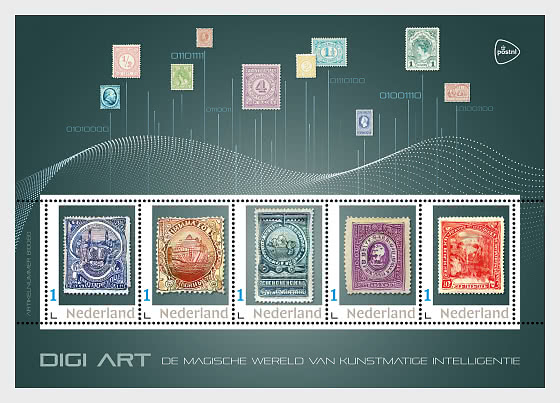 With the Digi Art issue, PostNL is the first postal company in the world to issue a stamp sheet with a design created by a computer algorithm. The Digi Art stamp sheet features five different personal stamps that were designed by an algorithm based on a collection of around 1500 stamps from the period from 1852 to 1920. The personal stamps are marked ‘Nederland 1’, the denomination for post weighing up to 20g sent to an address within the Netherlands

Artificial intelligence (AI), refers to computer systems that mimic human intelligence. These AI systems are capable of extrapolating large amounts of data, making new decisions and choices, and coming up with new interpretations. To achieve this, the computer systems use algorithms – mathematical formulas that are able to make independent decisions based on data or indicators – and learn from them. The developments in artificial intelligence are coming thick and fast. It is used in numerous applications, from face recognition on smartphones and self-driving cars to smart thermostats and deep fakes – digitally manipulated images, sounds and texts. Within AI there is a separate discipline called generative art, which is when a computer algorithm creates an original work of art or design. And this is exactly what was used for PostNL’s Digi Art stamp issue.

The stamp Digi Art stamp sheet features five postage stamps in five different designs. The five stamps feature five unique computer-generated designs against a dark background. At first glance, the five stamps look as if they have been issued before, but appearances can be deceiving. They may look like classic stamps, but they are not. All the elements are familiar, such as a supporting picture in the centre with a frame around it, a strip at the bottom for text, decorations in the corners and a frame with perforations... and yet, they are different from the familiar stamps from the 1852-1920 period.

The 10 stamps are connected to the personal stamps with vertical lines via a horizontal elongated wave. The lines indicate the direction that the old stamps have travelled through the algorithm – represented by the wave – to form the new stamps. The background colour is derived from the personal stamp in the centre. The dark corners suggest depth. The gradient returns in the background of the stamps. In between the stamps, there are six individual letters in binary code (ones and zeros). The ones and zeros have different hues to symbolise the process of their creation.