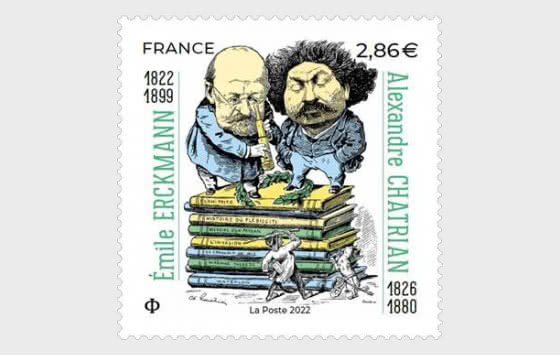 The visual of the stamp is an illustration dating from 1876 drawn by the journalist, originally from Gironde, Charles GILBERT-MARTIN (1839-1905). This drawing is a tribute to the two writers ERCKMANN & CHATRIAN. They are represented here on a stack of books containing their various writings with, at their feet, a laurel wreath. In addition to drawing, Charles GILBERT-MARTIN wrote and also painted still lifes. Émile Erckmann was born on May 20, 1822 in Phalsbourg, between Alsace and Lorraine. Not far away, in Soldatenthal, in the Vosges, Alexandre Chatrian was born on December 28, 1826. Their meeting and their friendship date from 1847. It is the beginning of an extraordinary literary adventure. Success did not come immediately: Chatrian joined the administration of the Eastern Railways and Erckmann pursued law studies in Paris without conviction. Erckmann writes, Chatrian corrects and struggles to have the works published in Paris. Ten years after their meeting, a few tales appeared in serials in Parisian newspapers. Erckmann does not like to stay in Paris and returns to Phalsbourg as soon as possible, Chatrian appreciates Parisian life, the two friends complement each other admirably. Finally, in 1860, L'Illustre Docteur Mathéus was a very big bookstore success. The real literary career is launched and will be confirmed year after year. Their heroes, humble people from Alsace-Lorraine, are named Madame Thérèse (Madame Thérèse, or The Volunteers of 92), Joseph Bertha (The Conscript of 1813, Waterloo), Michel Bastien (Story of a peasant); they tell us, in their own way, the history of the Revolution and the Empire. The works, novels, tales, essays, most often published by Hetzel, are also translated into several languages. After the defeat of 1870, Erckmann, opting for France, had to go into exile from his native town. Their publications will echo the distress of the lost provinces attached to the German Empire. A quarrel, orchestrated by Le Figaro, separated them in 1889. Chatrian died shortly after, on September 3, 1890. Erckmann spent his last ten years in Lunéville, where he continued to write and publish. He died there on March 14, 1899.