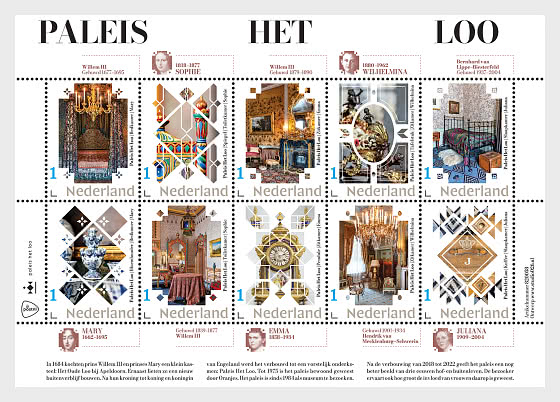 With the Het Loo Palace issue, PostNL highlights the reopening of Het Loo Palace in Apeldoorn this year after a thorough renovation. The stamps focus on the personal rooms of queens who lived and worked in the palace. The stamp sheet comprises ten personal stamps in ten different designs. Each stamp is marked ‘1’, the denomination for post weighing up to 20g sent to an address within the Netherlands. The design of Het Loo Palace was created by studio026 in Velp.

The ten stamps included in the Het Loo Palace stamp sheet feature cut-outs of colour photographs of the following 5 rooms in the palace: Mary Stuart's bedchamber, Sophie of Württemberg's dressing chamber, Emma of Waldeck-Pyrmont's sitting room, Wilhelmina of Orange-Nassau's sitting room and Juliana of Orange-Nassau's bedroom. Each room is featured on two stamps, one with an overview picture and one with a detail picture. The details depicted are a flower holder (Mary), a mirror (Sophie), a clock (Emma), a table centrepiece (Wilhelmina) and a suitcase (Juliana). The overview picture and detail picture are placed alternately above and below each other. Each detail picture is framed by a geometric line pattern, the basic shape of which is derived from a characteristic pattern in the room in question. This basic shape also returns in the four corners of the picture on the overview stamp. On the sheet edge, adjacent to the detail pictures, the first names of the female residents are printed in capitals. Adjacent to the overview pictures, the names of their spouses are printed in lower case, using initial capitals. A dotted line connects both stamps via the right-hand perforated edge of the stamps. Next to the names of each queen there is a monochrome portrait; an adaptation of a painting that belongs to the collection of Het Loo Palace. The name of the Het Loo Palace (Paleis Het Loo) stamp sheet can be found along the top edge, across the entire width of the stamp sheet. The lower left tab features the logos of PostNL and Het Loo Palace. The right-hand side of the stamps features a brief description of what we are looking at. The bottom of the sheet edge features an explanation of the issue.

The font used for the denomination 1 and Nederland was designed in 2018 by type designer Martin Majoor from Arnhem. The rest of the typography uses the Bodoni Moda from 2020, designed by Owen Earl of indestructible type (Seattle, Washington, US). This font is a modern version of the Bodoni font, designed in 1798 by the Italian engraver Giambattista Bodoni (1740-1813).

Het Loo Palace in Apeldoorn was built in 1686 as a hunting lodge for Stadtholder William III and his wife Mary. After their coronation as King and Queen of England, the residence was converted into a palace and expanded with 4 pavilions and a large garden. Het Loo Palace was used as a summer residence and working palace for successive generations of the House of Orange-Nassau until 1975. After an extensive restoration to bring the palace and gardens back to their 17th-century state, the building opened as a museum in 1984. The palace was renovated again between 2018 and 2022 and it was reopened 15 April. The Het Loo Palacestamps highlight the personal rooms of five female residents of the palace: Mary Stuart (married to King Stadtholder William III from 1677 to 1695), Sophie of Württemberg (married to King William III from 1839 to 1877), Emma of Waldeck-Pyrmont (married to King William III from 1879 to 1890), Wilhelmina of Orange-Nassau (married to Prince Hendrik of Mecklenburg-Schwerin from 1901 to 1934) and Juliana of Orange-Nassau (married to Prince Bernhard of Lippe-Biesterfeld from 1937 to 2004).

The design of the Het Loo Palace stamps was created by Anne Schaufeli and Huub de Lang of studio026 in Velp. The occasion for the issue is the reopening of the palace on 15 April 2022, after extensive renovations that took more than four years. Schaufeli was one of the first visitors. ‘I wandered around for hours,’ she says. ‘I took pictures, wrote notes, scouted around the halls, rooms and chambers. Put on headphones and listened to the stories of the palace and its inhabitants through the ages. I absolutely adore palaces, so it was a wonderful day. And Het Loo Palace’s interior has been beautifully renovated.’

Opulent furnishings
Many people know Het Loo Palace from the classical symmetrical architecture of the buildings, surrounded by its extensive and impressive gardens. And yet, Schaufeli and De Lang took the interior of the palace as the starting point for the design concept. ‘After all, the palace was renovated on the inside,’ Schaufeli explains. ‘So that is what we wanted to focus on. I came back after the visit with a head full of images and ideas. I was particularly struck by the opulence of the furnishings, with their many colours, ornaments, patterns and striking shapes. I was also impressed by the way you are drawn into the history of the palace through the stories of the former residents. All this became the guiding principle for the design. In consultation with Het Loo Palace, this was accomplished based on the rooms of queens who played an important role during three centuries of court and country life in Apeldoorn. We were able to make the palace come to life by telling stories and highlighting residents to create a living, personal experience. We provided a glimpse into their lives at the residence.’

Chronological order
The principal characters on the stamps are, in chronological order, Mary Stuart, Sophie of Württemberg, Emma of Waldeck-Pyrmont, Wilhelmina of Orange-Nassau and Juliana of Orange-Nassau. Schaufeli: ‘For each lady, we chose a room you can visit in the palace. Furnished the way it was during their time. Juliana, for example, lived there as a child, but not later on. Which is why you can only visit her bedroom. In contrast, since she stayed there the longest, many of Wilhelmina's rooms have been restored to their former state.’ It was difficult to choose, they are all beautiful images.’

Dynamic overall image
Since there were ten stamps available, and five queens, each queen got two stamps. ‘We have put the overview picture and the detail picture above and below each other, but they always alternate,’ says Schaufeli. ‘This way we introduced more of a dynamic into the overall picture on the stamp sheet. While we were picking the rooms, details and photographs, we created sketches to show how we wanted to put these on the stamps. At first we were working in different directions, but this was quickly resolved when the patterns in the palace emerged.’

Personality of the residents
When converting from concept to design, Schaufeli started with the detail pictures. ‘We wanted to do the personalities of the residents justice. For example, Mary loved Delft pottery, especially large tulip vases. The flower holder on the stamp is prominently displayed in her bed chamber. Sophie, on the other hand, had a fondness for the Moorish style, which can be clearly seen in the mirror featured on the detail stamp. In the case of Juliana, there was less choice. Her bedroom is more modestly furnished. But it does have a lovely little suitcase with a crown and the letter J on it. A pattern detail from each room, taken from things such as wallpapers, rugs and panelling, was used as inspiration for the design of each stamp. We graphically transformed these patterns to make them usable. In a way that allows you to look at the detail through the beautiful visual language of the palace.’

A calm background
The designers deliberately chose to not use colour in the background of the images and for the geometric shapes. ‘Otherwise it would have become too pompous,’ Schaufeli explains. ‘Our aim was to let the opulence and patterns speak for themselves and you reinforce that by keeping the background calm. You only find added colour on the sheet edge. Here you’ll find the portraits of the queens rendered in reddish brown. This is a shade that recurs throughout the palace. The typography featuring the personal details of the royal residents has also been printed in reddish brown.’

Searching for the core essence
According to Schaufeli, the final result is a stamp design that is in line with the earlier designs that studio026 created for PostNL. ‘Our work has always had a strong conceptual focus. For us, the core essence of design is to develop a concept that does justice to the story you want to tell. Creating something that looks pretty is easy, but that is not the point. A good design adds meaning and significance to the subject. And you can only manage that when you do your research, so you know what your subject is about and are able to capture and portray the core essence based on that.

About the designers
studio026 is a graphic design studio from Velp, consisting of Anne Schaufeli (1987, Warnsveld) and Huub de Lang (1980, Arnhem). Both studied at ArtEZ University of the Arts in Arnhem from 2004 to 2008. Since 2009, the agency has focused on designs that are conceptually, editorially and aesthetically sound. The agency’s graphic designers believe in conceptual thinking and take plenty of time and space for research, experiments and innovation. studio026 designs unique books, posters, magazines, catalogues, identities, infographics and all kinds of graphic expressions. Anne Schaufeli and Huub de Lang designed the Netherlands from the Air (2022) Historic Motorcycles (2021) Old postal routes (2020) and 150 years of the Red Cross in the Netherlands (2017) stamps for PostNL.