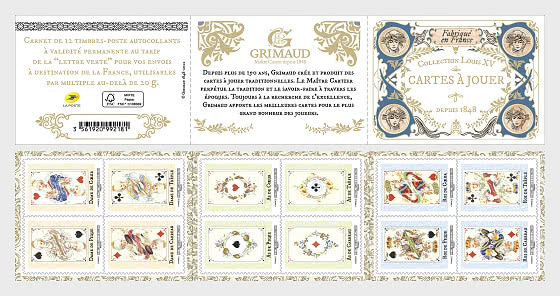 This game was made in 1902 by Master Cartier Baptiste Paul Grimaud in the workshops at 54 rue de Lancry in Paris. The models were designed and painted by the artist Jules Auguste Habert-Dys painter, master glassmaker, engraver and French teacher. Born in Fresnes en Loir et cher on September 23, 1850, died in Paris in 1930.

This magnificent game was made by the process of chromolithography, it includes cards, sliced ​​gold. It had on the ace of clover the official wet stamp of 1890. The back of the game represents a bouquet of roses, enhanced with a blue border. The original case is a printed cardboard bell box. The Louis XV game was reissued in 1974, the Grimaud house was then directed by Jean-Marie Simon.

This square corner booklet is made up of 12 stamps - the 4 aces, kings and queens. Imported from England in the 18th century, the game of Whist, ancestor of bridge without the auction principle, became a widespread game at the court of Louis XV. For more than 150 years, Grimaud has been creating and producing traditional playing cards, perpetuating the tradition and know-how of master cardmakers.