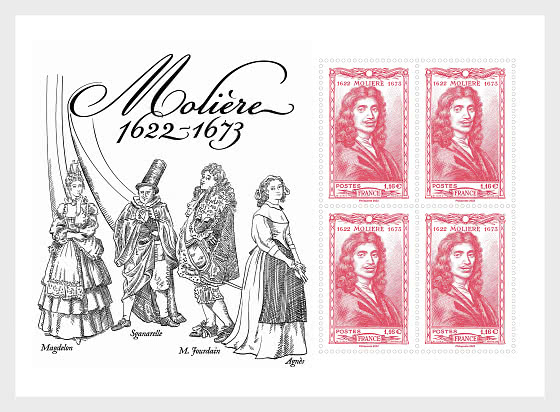 On the occasion of the 400th anniversary of Molière's birth, a special block is printed in intaglio on which four copies of the Molière stamp issued in 1944 are reproduced. The stamps are accompanied by illustrations of four of the comedy characters, from left to right, Magdelon (Les Précieuses ridicules, 1659), Sganarelle (Le Médecin in spite of him, 1666), M. Jourdain (Le Bourgeois gentilhomme, 1670), Agnès (The School for Women, 1662).

Jean-Baptiste Poquelin, known as Molière, was born in Paris on January 15, 1622. Author of comedies, actor, he joined forces with several comrades, including Madeleine Béjart, to form the Illustre Théâtre in 1643, which became Louis XIV's official troupe. Few years later. His plays, in verse or prose, sometimes accompanied by ballet and music, were to be popular with the public, offering a sharp criticism of the mores of the court, the Court of the King. In his comedies, there is a gallery of characters who have become archetypes, some of which caused a scandal at the time, such as Le Tartuffe or the Imposter and Don Juan. Molière died in Paris, after a performance on stage of Le Malade Imaginaire, on February 17, 1673. Molière's work is still one of the pillars of literary education and continues to be a great success in the theater, in France and abroad. foreign. Proof of the emblematic place it occupies, French is commonly referred to as the “language of Molière”.