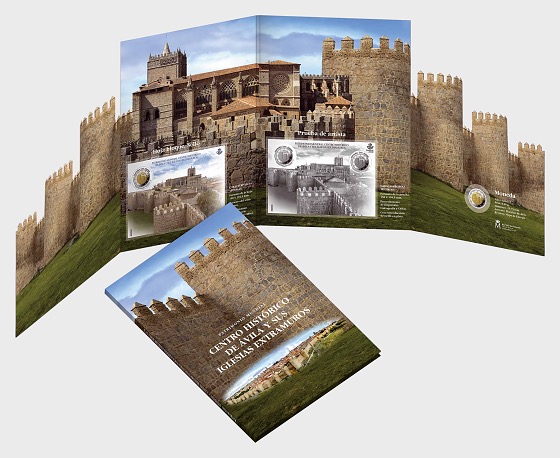 This year, Ávila is at the center of the World Heritage series with a souvenir sheet whose stamp depicts a coin that will also be put into circulation.

The engraving illustrating the coin depicts one of the towers of the city walls of Ávila, one of the city's most famous iconic monuments.

The stamp is framed by a magnificent intaglio engraving representing part of the wall and some of the most emblematic buildings, such as the Cristo Salvador Cathedral.

The controlled maintenance of its buildings, the exemplary nature of its fortifications, the density of civil monuments and "the remarkable presence of a type of construction and an architectural ensemble testifying to a significant stage in history", are worth in Ávila to be listed as a UNESCO World Heritage Site since 1985.

Crossed by the Adaja river and located at 1131 meters above sea level, the province of Ávila is the highest in Spain.

The city of Ávila is above all famous for its Romanesque-style medieval walls, which can be walked almost in their entirety.

The historic center of medieval origin is also very well preserved. A walk through its streets transports the visitor to the past.

The yemas of Saint Thérèse, sweets made from egg yolks and sugar, the quality of its meat or the patatas revolconas (potatoes with paprika, accompanied by charcuterie) invite the visitor to discover the traditions and gastronomy that make of this city an attractive destination.

Every year, thanks to this series, Correos evokes places in Spain that have the honor of being listed as World Heritage.

Stamps and coins have this characteristic of traveling around the world and thus become real showcases for the countries that issue them. This year, Ávila will travel around the world.