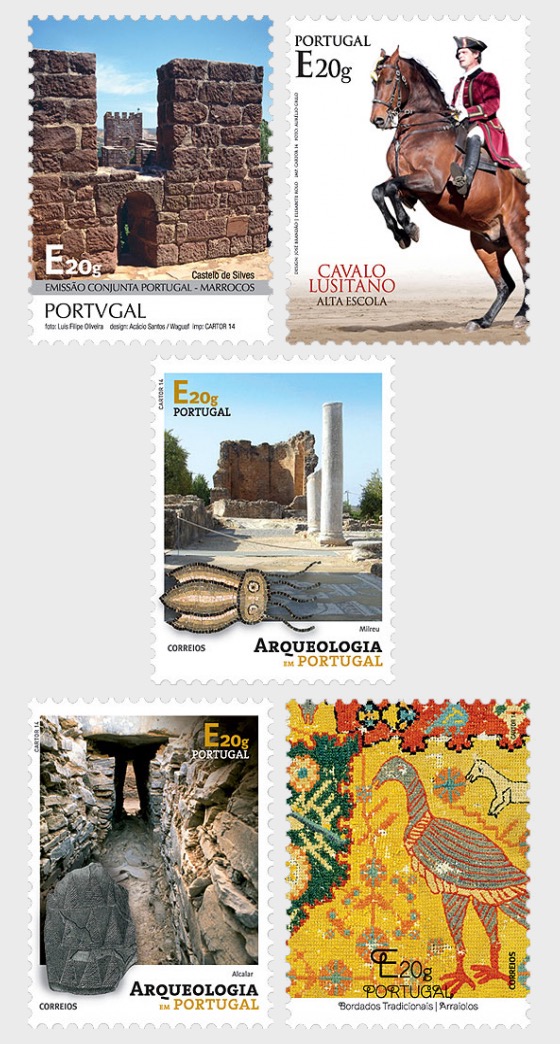 In Algarve and Alentejo, there is much more to discover beyond the heat, sun and beach, there are monuments with interesting stories and traditions that continue in our days.

Joint Issue Portugal – Marocco
Castle of Silves
«Popular Portuguese and Moroccan traditions have one very interesting r«thing in common, one that can never be emphasized enough: the “stone memory” of ancient buildings of unknown or unclear origins. […]
[…] The red castle in Silves, a city described by Muslim authors as one of Alandalus’ most prestigious cultural capitals, was built on the site of the fortification walls surrounding the magnificent Xarajib Palace […].»
Adalberto Alves,
in Brochure of the Joint issue Portugal Marocco

It is a national monument since 1910 and the largest, most significant and best preserved castle of the Algarve.

The Lusitano Horse
«The pure breed Lusitano, which has been ridden for more than five thousand years, arrives at the 21st century reconquering the splendor acknowledged to it in ancient times by Greeks and Romans, who considered it as the best saddle horse in the world. […]
[…] Over the last centuries, the Lusitano has stood out as a horse of excellence for both Horsemanship and Bullfight on Horseback but, besides being the most enjoyable Saddle-horse there is, it natural ability in Jumping Obstacles, Dressage, and Equestrian Competition Driving never ceases to surprise, and has won […] international titles. Currently, it is very much sought out as s Sports and All-rounder Horse, but also has a breeder […].»
APSL – Associação Portuguesa de Criadores do Cavalo Puro Sangue Lusitano, in Brochure of the issue The Lusitano Horse

Portugal has a large equestrian tradition, with associated Horse destinations such as Alter do Chão, in the Alentejo.

Traditional Portuguese Embroideries
Rugs of Arraiolos
«In our traditional society, embroidery was and still is a female activity. At a very young age girls were taught the first stitches by the older women of the family. […]
[…] In this home environment, during the long winter evenings spend around the fireplace, they practised both the simpler as well as the more complex stitches on small strips of fabric known asMaps or Sample Books.[…]
[…] From Arraiolos, further to the south, come the rugs that go way back in time and which origin is difficult to pinpoint. The oriental influence is also present in these items, both in the composition and in the choice of the decorative elements - animals, flowers, flower vases – executed in polychrome woollen thread with the typical Arraiolos stitches. […]
[…] Today, the Embroideries that we identify as pertaining to a given part of our country possess a number of specific characteristics that allow us to identify their origin. […]»
Madalena Farrajota Ataíde Garcia, in Brochure of the issue Traditional Portuguese Embroideries

Archaeology in Portugal
Alcalar and Milreu
«[…] All these places, evocative of the most distant past of the western part of the Iberian Peninsula, also play an important role in the history of archaeological research in our country. The megalithic structures, that always rouse curiosity owing to their striking presence in the rural landscapes, leading to various explanations as to their origin and function; the Roman past, because it has, at all times, constituted one of the cultural moulds of the west. […]» Carlos Fabião, in Brochure of the issue Archaeology in Portugal

The Ruínas Romanas of Milreu and the Monumentos Megalíticos of Alcalar are two examples of existing assets in the South.