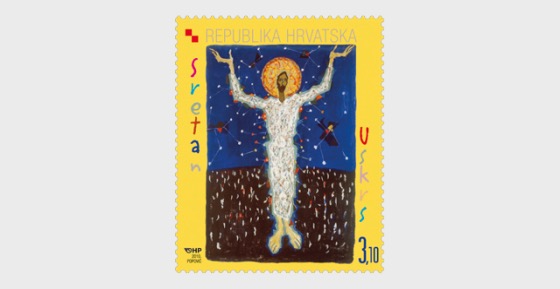 Motif: “Christ the King”, by Ivo Dulčić, 1957., tempera on cardboard With a draft by Ivo Dulčić for the huge fresco depicting the resurrected Jesus in the Church of Our Lady of Health in Split, the Croatian Post celebrates this year the most important Christian holiday. This is the holiday that gives sense to everything: not only because it promises an end to suffering and offers satisfaction for the injustice suffered, but also because it questions the concept of limited and finite. The infinity is its meaning, the infinity in which the causes of life here and now meet their inevitable afterlife consequences. It is not the holiday of easy promises. It comprises the death and the judgement, but reminds of mercy and love. Just at the time when Dulčić created his work of art the philosophy of existentialism was busy trying to create the infinite in the here and now. The Art Informel style, disintegrating the matter into particles, was a kind of visual and spatial counterpart to such experience of time. Ivo Dulčić is definitely the most important representative of this style in Croatian painting. Each particle of his artistic substance appears as living free, each gesture as if spinning the worlds. The peak of his artistic work is probably his cycle of stained glass windows in the Franciscan church at Kaptol, Zagreb. Also this fresco of his in the Split church of our Lady of Health, from 1959, has visible characteristics of the time. It is the composition up to the end of subjective spatiality, where the depth intends to meet the height, conquering it by surface; where the figure of Christ is measurelessly huge in comparison to everything surrounding him and especially to mankind deep down and asymetrically fractionised so that thanks to these fractions he reaches the peak of its expressivity. This mankind mass in the depth has been realised by numerous small points, ant-like forms that sum up resulting into a kind of collective being, in the «we» which is the persistent subject of the Art Informel poetry. The counterpart to this earthly ant-hill is the blue sky space in which huge, enduring signs, the signs of evangelists and the shapes of asterisms, in the interzone towards the invisible God’s dwelling, present the higher stage of handwriting and script. The Christ is so immense, and the mankind so broken to pieces because the basic content of the painting is summation. Everything is summed up in Christ. Not even the smallest detail of the world is missing in him. He leads everyone to heaven, to the afterlife, since he has paid the price in which everything has been incalculated. This immense intuition of Ivo Dulčić is expressed with utter clarity, without any need to offer explaining descriptions. Here lies the sense of the painting, the privilege of the illiterate: their Bible is like lightning. And thus, this year, with Dulčić we also move towards deeper comprehension. Željka Čorak