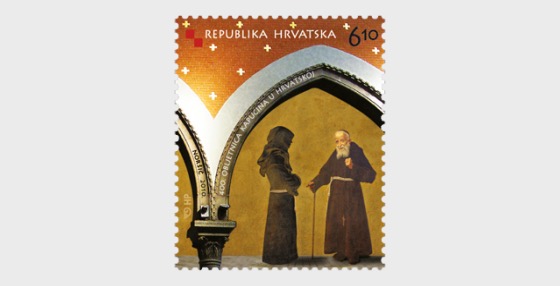 About 400 Years of Capuchins in Croatia

Motif: A Capuchin and St. Leopold Mandić under arcade of the Church of Our Lady of Lourdes in Rijeka The Order of Minor Friars Capuchins (lat. Ordo fratrum minorum Capucinorum, OFMCap) came into existence after the reform of the Franciscan Order as a third self-standing branch of the first Order of St. Francis of Assisi. It was founded by M. da Bascio and L. da Fassombrone for keeping alive the original «Rule» by St. Francis of Assisi. The new order was confirmed in 1528 by the Pope Clement VII, and at the time of the Pope Paul V, in 1616, received his own minister general. The seat of the Capuchins is Rome. The Capuchins wear brown habit with pointed hood (like the one reportedly worn by St. Francis). During history, the Friars Capuchins - known as the order practicing highly contemplative life – developed a diverse apostolate among different social strata. They accepted the pastoral work as well as the spiritual care, education and missionary work and were an important leverage of the Catholic Reformation in the 16th and 17th century. Actually, after 1574 the Pope Gregory made possible the spreading of the Capuchin Order outside Italy, so that from that time their intensive preaching and missionary work began. The arrival of Capuchins in Croatia is directly connected with the founding of the Capuchin Monastery in Steiermark (Styria) in 1600, i.e. with the coming into existence of the Styria Province in 1608. Officially the Capuchins arrive for the first time to Croatian regions in 1610, first to Rijeka where they found and begin to build the monastery, whereafter monasteries are founded in Zagreb in 1618, in Split in 1691, in Varaždin in 1699, in Osijek in 1703 and in Karlobag in 1710. The period from 1625 to 1789 is also known as the golden age of the Order because then starts the intensive spreading of the Capuchins to other Croatian towns. The 18th century marked the beginning of stagnation of the rank and the dissolution of numerous monastery communities. The year 1824 is considered the beginning of the new epoch. In that year a sixteen-year old Juraj Bedenik from Koprivnica, who receives the name Fra Angelic, joins the Order. Actually in 1845 Fra Angelic becomes a custos of a Croatian littoral custody for which he - in 1874, managed to achieve the promotion to a rank of province. At the beginning of the 20th century the monastery in Rijeka under the leadership of Fra Bernardin Škrivanić becomes the central monastery of Croatian Capuchins and the focus of the religious and cultural revival in Croatia. Thanks to his initiative, in February 1904, the building of the church of Our Lady of Lourdes in Rijeka - after the project by the architect Giovanni Maria Curet, begins. The lower part of the church was finished in 1908 and dedicated to Our Lady Comforter of the Afflicted in Purgatory. Its final aspect received the facade of the upper church in 1929 after the project of the architect from Rijeka, Cornelij Budinich. In the upper church, the famous painter from Rijeka, Romolo Venucci, successfully made the ceiling paintings and decorations. The sculpture decorations on the facade were made by the Venetian sculptor Urbano Bottasso and the stonemason from Rijeka Antonio Marietti. The bell tower, which was to be erected above the main facade, has never been built. The entire building, a quality neo-mediaeval architecture is unique in wider Rijeka region. At that time, on the initiative of Fra Bernardin Škrivanić, also modern printing houses “Miriam” and “Kuća dobre štampe” (The House of Good Print”) were founded. The monastery in Rijeka becomes a central point of the Croatian Catholic Movement headed by the Bishop of Krk, Antun Mahnić. In the year 1967 the contemporary Capuchin Illyric Province which included Slovenian and Croatian monasteries, was divided into Slovenian and Croatian Commissariat, i.e. Commission. Short time after that in 1974 the minister general of the Order, Fra Pashal Rywalski, proclaimed the Croatian Commissariat an independent province. From that time till today the Croatian Capuchin Province is under protection of St. Leopold Mandić and comprises the monasteries in Zagreb (St. Michael and St. Leopold), Varaždin, Osijek, Rijeka, Karlobag, Split and Dubrovnik. The commemoration of the 400 years from the arrival of Capuchins to Croatia is a very important anniversary in the Croatian cultural history and presents an outstanding and important element in the overall Croatian identity.