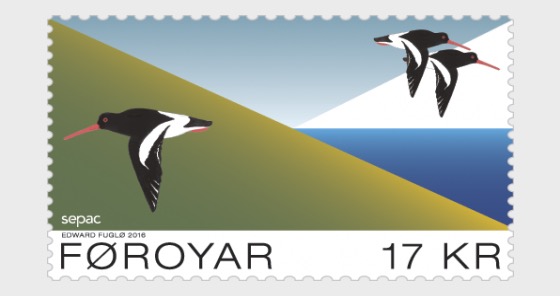 One day when my soul was so tired and sad,
I walked towards the shore in the west
Then I heard your ”klip”, this familiar sound
You most beloved summer guest...

Winter storms, drizzle and sleet, the ocean's relentless hammering on the coast and - the almost permanent winter darkness. Although the merciful Gulf Stream guarantees relatively mild winters, temperature wise, here in the North Atlantic and we rarely suffer from extreme cold, winter is a tough time of year to go through. Rain, snow and hail, combined with winter darkness and the harsh Atlantic gales, can faze even the strongest.

It is therefore no wonder that the Faroese rural dean, nationalist and poet, Jákup Dahl (1878 - 1944), probably on a stroll in the hometown Vágur, was torn out of his depression by the sound of the oystercatcher's calling - and inspired to write one of the most beloved Faroese songs: "Tjaldur, ver vælkomið" - a welcome hymn to the Faroese national bird, the oystercatcher (Haematopus ostralegus).

As a matter of fact, spring in the Faroe Islands is heralded, even before it physically manifests, by the arrival of the oystercatchers, from wintering in the British Isles and the French Atlantic coast. The symbolic significance of this particular bird's arrival is not only a cultural condition – the oystercatcher's first call, the characteristic “klip, klip,” also affects the instincts, the unconscious computer, which detects and combines the small signs of oncoming changes. Just like the arrival of the first lams, a couple of months later, the first calling of the oystercatcher is something that people notice and talk about.

So, although the stormy winter season is not over yet, Saint Gregory's Day on the 12th of March is celebrated for the arrival of the oystercatcher and the oncoming spring. All over the country, scouts march, people gather at public meetings and listen to speeches about springtime – and sing Dahl's popular song about the beloved summer visitor.

It is high summer, and nature exploits the long daylight to its extent. In the outback, sheep and lams are grazing, while the oystercatcher and other birds of the outback are busy hatching and feeding their young. Down in the meadows, the faint breeze makes waves in the juicy grass, while eider ducks and their hardy ducklings gently float in lazy waves in fiords and straits. A surprised tourist may stop on a path, puzzled by the sound of playing children at eleven o'clock in the evening – a pretty common occurrence in the Faroese summer. And generally sounds are carried wide and far in the bright evening hours, when the noise from man's daily work has subsided. The cry of the seabirds, wading birds calls and warnings and the smaller birds song in gardens and meadows. This is the happy season, the children's season, the festival season.

After the last town festival, the national festival Ólavsøka, in late July, comes the next major change in the cultural landscape. Farmers and smallholders have to secure the winter feed for sheep and cattle, and begin to harvest hay in the meadows. Slowly but surely bright rectangles appear on the slopes, until the meadows finally resemble an oversized patchwork. The landscape loses its fresh green color - and out of the Atlantic, the first low-pressure storms come rolling toward the islands. The urban gardens change color as shrubs and trees first turn yellow and then red and brownish - autumn has arrived and nature slowly shuts down.

In September the oystercatchers start to congregate in large flocks on the beach - and in the middle of the month, the first birds take off and start the long journey to the British Isles and the Atlantic coast of France.

This is the melancholic season, the beginning of winter, when people see the last oystercatchers migrate southeast. Ahead lies stormy months with rain, sleet and snow.

But that is the price for living on these beautiful but rugged islands. And we pay it without complaint, knowing that sooner or later, the oystercatcher's “klip, klip”, again will herald the coming of spring.