25 Years of the AICEP - Souvenir Sheet 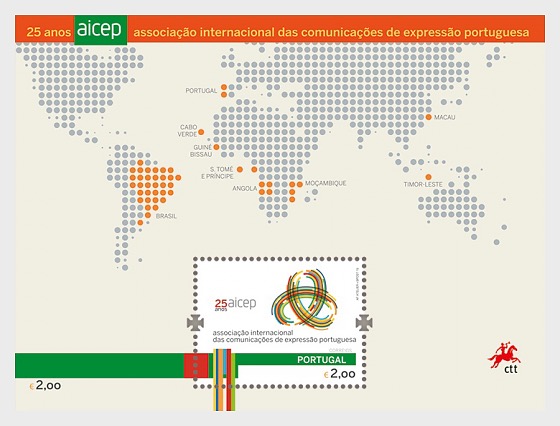 About 25 Years of the AICEP

Constituted in 1990, the AICEP is a non-governmental, non-profit international, scientific and technical association, whose object is to promote closer relations between its Members, so as to contribute to the harmonisation, development and modernisation of communications, as well as supporting projects and programmes, in Portuguese-Speaking Countries.

At the time it was visionary when it included Communications Operators in its midst, irrespective of being postal or telecommunications, demonstrating a clear vision of convergence and complementarity between the two sectors of the industry. It was also visionary when it congregated its Members by proximity of language and cultures, rather than by geographic criteria.

And accompanying the natural dynamism and strategic development of the Communications sector, namely in telecommunications, which, in our current times, cannot be dissociated from contents, the AICEP, in its continued pursuit of innovation, incorporated the “Contents” (television) in May 2013, thus strengthening and consolidating its role as a representative Association that is increasingly more inclusive of the different areas of Communications in the Portuguese-speaking World.

The AICEP is, therefore, a space of convergence of the partners of the Communications sector, the only association worldwide which combines Postal Mail, Telecommunications, Contents and Regulators and its mission is to promote and support the sustainable development of Portuguese-speaking Communications.

Due to the relevance of the AICEP throughout the entire Lusophone world, not only due to its past which pays homage to all of us, but also in its more current role as an instrument to promote unity between peoples, as a vehicle of culture and as a tool for business and diplomacy.

Portuguese-speaking Countries and Territories which constitute its universe decided to jointly commemorate the “25 Years of AICEP” with the issue of a series of stamps, as part of its official stamp issue plan.
Thus, the Appointed Postal Operators of Angola, Brazil, Cape Verde, Guinea Bissau, Macao, Mozambique, Portugal, Sao Tome and Principe, and East Timor have decided to join this philatelic commemoration, which takes the form of a Lusophony Joint Issue.