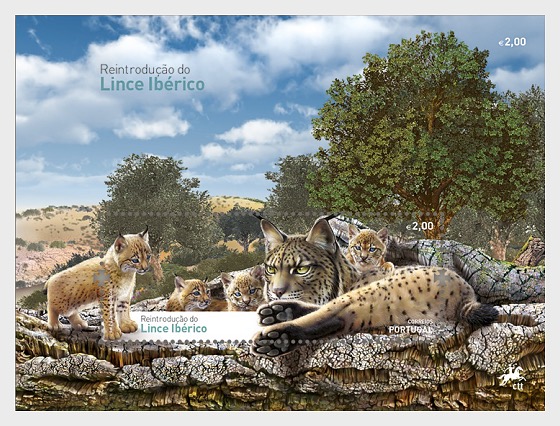 Reintroducing the Iberian Lynx into Portugal - Souvenir Sheet for only GBP £1.89

About Reintroducing the Iberian Lynx into Portugal

Born and bred in captivity, Katmandu and Jacarandá marked the beginning of a new era in the history of the Iberian lynx in Portugal, on 16 December 2014, by being the first pair of lynxes to be returned to the wild within the Portuguese territory.

The chosen setting for this emblematic moment was the Guadiana Valley Natural Park, in the Mértola Council, Alentejo. A total of 10 animals will be gradually released into this area throughout 2015, as part of a Portuguese-Spanish project aimed at preserving this species and the Mediterranean ecosystem.

Witnessed by government officials and news reporters, the releasing of the first animals into their natural habitat in Portugal was carefully monitored by the technicians involved in this programme, which aims to preserve the Iberian lynx (lynx pardinus), deemed by the International Union for Conservation of Nature as the world's most endangered feline species.

Five breeding centres, of which one is located in the Algarve and the remaining are located in Spain, have been created since 2001, when Portugal and Spain decided to join efforts to save this species. Animals from local lynx populations have been kept in captivity at these centres, where new animals have also been born.

The return of the Iberian lynx to the wild, which represents the second stage in the programme, started in Spain, where dozens of animals have already been released back into their natural habitat, including animals from the Portuguese Iberian Lynx Breeding Centre of Silves (Centro Nacional de Reprodução do Lince Ibérico de Silves – CNRLI). In Portugal, male and female lynxes Katmandu and Jacarandá, respectively, will go down in history as the first animals of this species to be released into a fenced-off area measuring about 1.5 hectares, in Mértola. The ability of animals to survive in the wild is studied within this area, after which animals are effectively returned to their natural habitat, despite continuing to be monitored through radio collars.

The Iberian lynx is one of the dominant predators found in Mediterranean ecosystems, where it has lived for a million years. This species plays an important role in ecosystems, as it influences carnivore densities and may help correct potential imbalances caused by generalist predators. According to data collected in the 1990s by the Institute for Nature Conservation and Forests (Instituto de Conservação da Natureza e das Florestas – ICNF), the Iberian lynx population totalled 1,000-1,200 animals, grouped into nine subpopulations, of which three were found in Portugal.

Habitat loss, culling and a decrease in wild rabbit populations, the main prey of the Iberian lynx, led to a steep decline in the size of the lynx population in the mid-20th century.
Other relevant factors, such as diseases and the risk of being struck by vehicles, are addressed by the Action Plan for the Conservation of the Iberian Lynx in Portugal (Plano de Ação para a Conservação do Lince Ibérico em Portugal – PACLIP), a joint effort involving landowners, farmers (including crop, animal, forest and game farmers), hunters, the civil society, the scientific community and the public administration.

In the medium-term, the ICNF expects to release eight to ten animals into their natural habitat per year, bearing in mind that the restoring of a viable wild population is a long, tentative process, which requires the commitment of all members of society.